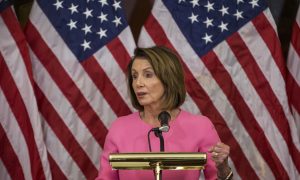 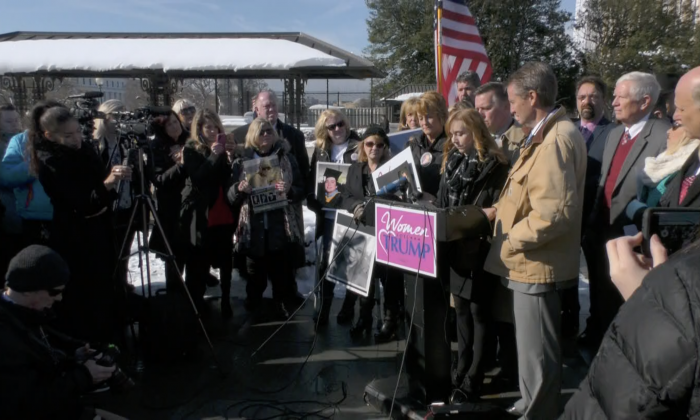 A coalition of angel families, Women for Trump, congress members, families who have lost loved ones to drug overdoses, war, and 9/11, rallied outside the Capitol in Washington on Jan. 15, 2019, to show their support for President Donald Trump and his request to build a wall on the southwest border. (York Du/NTD)
Politics

WASHINGTON—On a cold January morning outside the Capitol, a coalition of groups that support U.S. President Donald Trump had an even colder message for House Speaker Nancy Pelosi and Senate Minority Leader Chuck Schumer over their refusal to fund a border wall.

“Which one of your children would you be willing to sacrifice?” Amy Kremer, the cofounder of Women for Trump rhetorically asked Pelosi. “This is not just a manufactured crisis … This is very real.”

With her were over 20 other Trump supporters—many of them angel families who have lost a loved one at the hands of an illegal alien.

“Nancy Pelosi, you’ve got a nice wall around your home. Build that wall for the safety and security of the American people,” said Maureen Laquerre, an angel sister whose brother was killed in 2009 by an illegal alien driving without a license.

The groups visited Congress on Jan. 15 in the hopes of meeting with the recently elected speaker and minority leader, who have been in a stalemate with President Donald Trump over the $5.7 billion he wants for a wall on the border with Mexico.

Trump has cited human trafficking, illegal immigration, terrorism, and the flow of illicit drugs through the southwest border as the reasons he wants a wall—all concerns shared by those attending the rally.

Also at the rally was former ICE Director Tom Homan who addressed speculation about the number of special-interest aliens (SIAs)—people who have been flagged because of their travel patterns and behavior—coming through open parts of the southwest border. DHS said that last year, 3,000 were stopped at the southern border but not how many of those were apprehended between ports of entry.

“If anyone doesn’t think the southwestern border is a vulnerability to terrorism, then again, you’re not paying attention.”

Members of Congress and the families of those who have died of drug overdoses, fighting in the Middle East, and in 9/11 were also part of the coalition.

A common refrain throughout their speeches was the feeling that they have been put in the shadows while illegal aliens have been welcomed with open arms, as evidenced by the number of sanctuary jurisdictions that protect them. According to the Center for Immigration Studies, there are about 300.

Illustrating their point, some joggers started heckling the group as they ran past.

DC trip off to a great start!

Standing here with an angel mom and @WomenforTrump and our Uber just drives off and leaves us standing here. 🤷‍♀️

After rallying outside, the group headed in to see if they could get meetings with Pelosi and Schumer. They were not successful, according to social media posts by the various groups.

One angel mom, Mary Ann Mendoza, told NTD that she called Pelosi’s office to arrange a meeting with the speaker beforehand. She said there was silence for a moment on the other line before the staffer told her “no.”

Pelosi and Schumer’s offices did not respond to a request for comment on whether the group had called ahead to request a meeting and whether they were denied.

Women for Trump, the organizer of the event, did not respond to follow up calls and emails on how the group went about arranging the meetings.

Trump has declined to sign any more appropriations bills until the funding for the wall is included in the budget for the Department of Homeland Security.

Democrats have so far refused the funding request. Any funding bill needs 60 votes in the Senate to get passed, and with only 53 Republicans and a Democrat-controlled House, Trump will need Democrat’s support to get funding for a wall.

This has resulted in a partial government shutdown, that, as of Jan. 15, was in its 25th day.

Several of the rally-goers NTD spoke to said they were sympathetic to the fact that federal and other workers have missed a paycheck as a result of the shutdown. But they also expressed appreciation for Trump’s firm stance on border security and his America-first policies.

On Jan. 16, Trump sat down with the bipartisan Problem Solvers Caucus to discuss a way forward after talks stalled between the president and Democratic leaders.

“The president and his team had a constructive meeting with bipartisan members of the problem solvers caucus. They listened to one another and now both have a good understanding of what the other wants,” Press Secretary Sarah Sanders said in a statement. “We look forward to more conversations like this.”