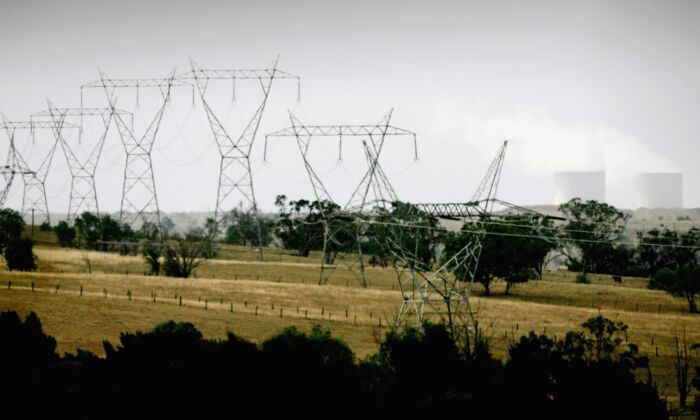 Chimneys at the Bayswater Power station emit water vapour Feb. 14, 2006 in Muswellbrook, Australia. The power station contains four 660 Megawatt generating units, with each turbine generating the equivalent power of 16 Boeing-747 jet engines at full thrust. The Muswellbrook area provides a huge amount of New South Wales' power and energy needs, with eight coalmines in the district, and the presence of the Liddell and Bayswater Power Stations. (Ian Waldie/Getty Images)
Australia

Design papers for the National Energy Guarantee released to the public on June 15 have reopened debate on the nation’s future energy policy.

Members of the Coalition expressing last week that a lack of details in the document left them with concerns regarding affordability and reliability unaddressed.

In its current form, the National Energy Guarantee (NEG) is an attempt to outline bipartisan policy that the Commonwealth and the states and territories can agree on to deliver affordable and reliable electricity for all Australians while at the same time meeting the emissions reductions targets committed to after Australia ratified the U.N. Paris Climate Agreement on Nov. 10, 2016.

Environment and Energy Minister Josh Frydenberg invited business and industry leaders to a Liberal Party meeting in Canberra on June 26 to allay the concerns of a handful of conservative MPs on the backbench who, along with more than a dozen Nationals Party MP, are members of a Coalition committee that is yet to support the latest technical document on the government’s proposed NEG.

But the meeting did not convince backbenchers of the NEG’s ability to consistently deliver lower electricity prices, former prime minister Tony Abbott told 2GB on June 29.

“The only guarantee, as I read it, is that emissions will come down,” said Abbott, who has constantly been in highly contentious territory over his views on energy and climate change.

“I don’t mind reducing emission but not if it drives your cost of living through the roof and not if it makes your job more precarious.

“We are damaging our economy in an attempt to save the planet in 100 years time, and I don’t think our children will thank us if we damage their future in order to make the world a bit colder for our grandchildren.”

“Decisions that governments make today have enormous ramifications for our people a decade or two decades hence, and in a fit of environmental virtue signaling, we do not want to damage our economy forever.

“The crazy thing is that we are exporting more and more of our coal for other countries to turn into electricity, but we are apparently neuralgic about using more of it here,” Abbott added.

When asked why he is so outspoken on this issue, Abbott said he felt obligated as energy is a critical issue of national security for any country.

He laughed off rumours circulating in the media that he was seeking to challenge Prime Minister Malcolm Turnbull’s leadership.

Liberal MP Craig Kelly, chair of the committee, agreed with Abbott’s concerns. As it stands, “the details of the National Energy Guarantee are still not nailed down,” Kelly told 2GB.

Kelly said in addition to having concerns about delivering consistently affordable power, another big concern was that in its current form, the NEG’s reliability guarantee would likely involve restricting the energy use of 100 of the nation’s largest energy users in times of peak demand. This “demand management” presents an unreasonable cost burden for businesses who are competing in a competitive global market.

“For 100 businesses in Australia, it appears reliability means that they will have their power turned off unless they have their own backup diesel generators or they have some other arrangements with other companies,” Kelly told the ABC.

“This will put industry in Australia at a comparative disadvantage.

“Business wants policy certainty. All members of the Coalition would support a consistent approach to energy policy,” Kelly said.

.@LiberalAus MP @TonyPasin: The most important of the energy debate is price. We have an emissions target, a reliability target, but what we really need is a price target. I nominated a figure of $60 per MWh in wholesale price.

In a separate party room meeting on June 25, the Nationals agreed for Deputy Prime Minister Michael McCormack to discuss with Turnbull the feasibility of accommodating a new, non-subsidised high-efficiency, low-­emissions (HELE) coal-fired power station like those being built overseas to address the impending shortfall in dispatchable power as old high-­emissions coal units go offline.

“With just 1.3 percent of the world’s emissions, we must recognise Australia can’t solve climate change alone,” Frydenberg said in April. “Calls to decarbonise the economy overnight are as irresponsible as they are futile. Only international action can make a difference, which is why we join 175 nations in ratifying the Paris Agreement.”

While the NEG has broader support from the business community who seek “policy certainty,” the Chamber of Commerce and Industry South Australia said in a submission to the ESB in March that: “South Australian businesses have already borne the brunt of an electricity market which incentivised renewable development with no regard for dispatchable electricity and base-load competition concerns” and that these issues needed to be sufficiently addressed by the final design of the NEG.

“The NEG will have long-term ramifications for the market and it is important to get the design right.

“This obliges us to raise genuine concerns which should not be ignored for the sake of having a new emission reduction and reliability policy implemented expediently,” Business SA said.

What is the National Energy Guarantee

The Turnbull government announced the NEG policy framework in October 2017. “This is a National Energy Guarantee that will ensure that we have affordable power,” Turnbull said. “That it is reliable—we keep the lights on and we can afford to keep them on—and that we meet our international commitments under the Paris Agreement to cut our emissions.”

The policy framework was crafted by members of the Energy Security Board (ESB)—appointed by the Council of Australian Governments (COAG) energy council to implement recommendations of the Finkel Review—who are seeking consultations with stakeholders on the latest draft detailed design documents until July 13. COAG is the nation’s peak intergovernmental forum.

Frydenberg told the ABC on June 26 that the Turnbull government believes the NEG is the country’s best chance to break from 10 years of inconsistency that has plagued Australia’s energy policy, scaring off would-be investors and resulting in the 2017 state-wide blackout in South Australia (SA) that cost businesses an estimated $450 million.

“It’s vitally important that it is adopted because what we need is a technology-agnostic energy policy that encourages investment, and that’s precisely what the national energy guarantee will do,” Turnbull said in a statement.

A lack of dispatchable base-load power in the eastern grid on June 5, June 7, and June 8—due to maintenance issues in New South Wales’s aging coal-fired units and demand from SA—resulted in one of Australia’s largest aluminium smelters, Tomago, having to halt some of its operations, reported the Newcastle Herald.

CEO Matt Howell said Tomago, which has been running 24 hours a day since 1983, “choose” to reduce its electricity load to avoid being slugged with its retailer’s higher spot wholesale prices that are charged when distributable power in the state’s grid drops below a “trigger point.”

According to the Herald, Tomago may have been charged a spot wholesale price of up to 175 times its fixed price of $80 per megawatt hour (Mwh)—that’s a maximum price of $14,000 per Mwh—if it had continued on with business as usual. Some parts of NSW may also have experienced a blackout.

Howell has now joined others in warning that the national energy grid is “at a crisis point” and that power supply to his smelter was increasingly at the mercy of the weather, he told the Herald.

“This is the likely future of our energy grid as once reliable base-load generators exit the [National Energy Market] and are mostly replaced with intermittent wind and solar projects with no practical storage to speak of,” Howell said, despite those who would argue otherwise.

Bipartisan Support Needed, But ACT Out

Bipartisan support is needed to implement the NEG, with Commonwealth and the states needed to sign-off before any proposed reliability and emissions reduction targets can be imposed.

But the ACT Labor government announced a backflip on its support of the NEG on June 24.

Rattenbury said that Labor and the Greens were concerned that there had been no talk from the government to reduce Australia’s CO2 emissions by at least 26 percent by 2030, as mandated by the Paris climate agreement.

The 26 percent cut based on 2005 levels would be the lower end of Australia’s 26-28 percent pledge, said Rattenbury, adding that according to analysts, CO2 cuts could go much deeper, Fairfax reported.

The target would mean each person would need to cut 50 to 52 percent of their CO2 emissions.

The government has made plans to achieve this through its $2.55 billion Emissions Reduction Fund and Safeguard Mechanism that has already purchased 47 million tonnes of emissions reductions since 2014. The fund is “complemented by the Renewable Energy Target, energy efficiency improvements, phasing out very potent synthetic greenhouse gases, and direct support for investment in low emissions technologies and practices,” according to the government’s website.

Australia is currently on track to exceed its 2020 target of five percent below 2000 levels, which is equivalent to 13 percent below 2005 levels, factoring in the subsidised renewables projects already committed to the system through the Renewable Energy Target.

Research by economic consultancy BAEeconomics revealed that taxpayers will be paying up to $2.8 billion a year to subsidise renewable energy sources such as wind and solar to ensure Australia reaches its Renewable Energy Target, Fairfax reported.

Solar photovoltaic (PV) technologies accounted for about $1.5 billion—more than half—of the annual subsidies, most of which come in the form of state government tariffs paid to households and businesses who have installed solar PV panels, Fairfax cited from the research.

“So what are the prospects for a more even playing field? In the case of wind and solar, the subsidy is locked in at least for the next 13 years,” Minerals Council of Australia chief executive Brendan Pearson wrote in an opinion piece in The Australian Financial Review.

“If there are subsidies to be harvested, and there are, in these renewable or unreliable power sources, they’ll go and take them.”

“But we don’t need more unreliable power, we need more reliable 24/7 base-load power, and that’s why I’ve said, that’s why the National Party is now saying to the minister and the PM we’ve got to get new coal-fired power into the system if we are going to continue to be a country that makes things,” Abbott said.

Frydenberg told the ABC, “What’s important to understand about the guarantee is that it’s an all-of-the-above guarantee: it’s technology neutral, involves no taxes, no [new] subsidies, no trading schemes, that’s a break from the past.”

Final Framework to be Delivered in August

The Commonwealth “continues to work with the Energy Security Board (ESB) and the states and territories in finalising the [NEG] in the lead-up to the COAG Energy Council meeting in August,” Frydenberg said, according to Fairfax.

The board will finalise the policy framework by Aug. 2 to hand to the ministers of the COAG energy council for their deliberation.

If accepted by the Commonwealth and states in a critical COAG Energy Council meeting scheduled for Aug. 10, the government will then work with the board to finalise the draft legislation for a final round of consideration.