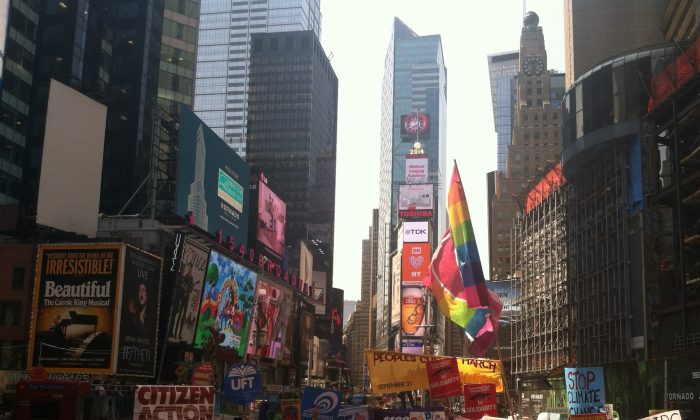 NEW YORK–Local and national environmental groups, labor unions, and community organizations rallied at Times Square on Wednesday to bring attention to the People’s Climate March in September that will take place ahead of the United Nations’ Climate Summit. Organizers hope to bring together the biggest march in history to address climate change.

U.S. president Barack Obama and other world leaders will be attending the UN Climate Summit on September 23 to discuss policies to thwart the effects of global climate change. The march will take place two days prior, on September 21.

Over 150 people attended the rally on Wednesday. Local community organizations cited Superstorm Sandy as a warning sign of the damages climate change can bring to the city—especially to low-income communities that are disproportionally affected by natural disaster.

“This is not just about the environment. It’s about communities. It’s about public health. It’s about justice,” said Eddie Bautista, executive director of the New York City Environmental Justice Alliance. The organization is a network of community organizations in low-income neighborhoods.

According to a report by the Center for American Progress, 55 percent of New Yorkers who were affected by Sandy-related storm surges had an average annual income of $18,000.

Members of the Transport Workers Union called for cleaner transportation alternatives, while the International Brotherhood of Electrical Workers expressed their wish for a reliable electrical grid that provides clean energy and jobs for Americans.

Reverend Fletcher Harper, who is also executive director of the interfaith environmental group GreenFaith, represented members of the faith community in support of the march. “Climate change exacerbates every kind of social injustice that communities of faith have fought for thousands of years,” he said.

Over 500 organizations from across the country, as well as international groups, have endorsed the march and plan on bringing members to join in September.