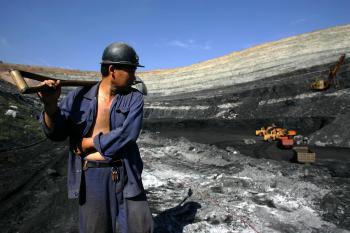 A coal miner walks on coal seams in an open pit coal mine on Aug. 19, 2006, in Chifeng of Inner Mongolia Autonomous Region, China. Many privately owned coal mines are being assimilated into larger state-run companies at a loss to the owners. (China Photos/Getty Images)
China

Coal Mine Ownership in China Changes With Political Winds (and Whims)

In 2007, Lian Zuqian spent US$30 million on a small coal mine with an annual output of two hundred thousand tons in the city of Linfen, Shanxi, a province known by Chinese for its coal industry. He then spent another $12 million on infrastructure and equipment.

In 2008, when Lian thought his mine ready to operate, he found he could not get permission to begin because of the upcoming Beijing Olympic Games. Back then, the Chinese Communist Party’s (CCP) highest priority was to improve air quality in Beijing, cleaning up the city’s smog-filled skies. Although Lian's small mine is over 400 miles southwest of the capital, authorities were unwilling to take any chances, determined to stage a perfect show in front of the world.

Lian knew the only thing he could do was wait; his was just one of the tens of thousands of companies forced to shut down for the Games.

In late 2008 when it was finally time to produce some coal, he found that the real nightmare had only just begun.

A new order was issued by the Shanxi provincial government: All coal mines producing less than three hundred thousand tons per year were to shut down and prepare to merge with the large coal mine operations. Officials gave Lian's mine a tentative price tag of US$9.6 million, ready for one of the large, usually state-owned coal companies to take over.

That figure, however, could not even cover the US$13 million in interest Lian needed to pay on the loan for his investment over the past three years, since he had borrowed the money through various private channels with high interest rates. In China, it is close to impossible for a private entrepreneur like Lian to obtain a big loan from banks.

Though nobody knows exactly how many private mine owners like Lian were affected by the new order, there is no doubt that the number is significant.

Taking the city of Linfen as an example, it had over 340 mine companies. After the restructuring, these mines will either be taken over by one of the seven state-owned giant coal groups or merged into one of the 10 large local mine companies.

In Lüliang, another city, 500 out of the 600 mine companies were shut down for takeover. It is estimated that at least US$7.4 billion has been invested by private owners like Mr. Lian in coal mines in Shanxi over the last several years. Although the province outputs a quarter of China's coal, 80 percent of its coal mine wells are categorized as small and are subject to being shut down and merged.

According to Chinese media, the order was intended to improve mining efficiency and reduce fatal mining accidents. It was claimed that the efficiency of small mines is usually only half that of the big ones, and that small mines can only harvest 10 percent to 15 percent of their coal. When small mines compete with large coal companies, the small ones indeed waste national resources. As a result of the order, Chinese authorities would reduce the number of coal mines from 2,598 to 1,053 by the end of 2010.

As for the safety issue, the rationale is that private mines usually have older equipment and poorer management, and that they are more accident-prone. China's official statistics suggest that privately owned mines are 11 times more fatal than state-owned mines.

Some private mine owners disagree with these claims, however.

Fan Xingwu, who owned a mine company with an annual production of over two million tons, could become one of the few of private mine owners to survive the turmoil. He said it was the state-owned coal companies that have more fatal accidents, because the cost and compensation incurred by accidents is taken care of by the government instead of the companies' executives.

In contrast, private coal mine owners are more careful about safety issues because they know that the cost of a single big accident could put them out of business. Biased media reports also helped create the public impression that state-owned mines are safer. The media more closely follow official reporting guidelines when covering an accident in state-owned mines, emphasizing only rescue efforts but not malfeasance that may be behind an accident.

Not all private company owners were unhappy with the order and a number were indeed eager to sign a deal with the state. According to the mine evaluation method employed by the Shanxi government, the value of a mine has three parts: (1) the value of the above-ground infrastructure, (2) the value of the remaining coal, and (3) other miscellaneous compensation.

In official assessments, much of the weighting is given to the above-ground component. This means that some very old mines that have accumulated infrastructure over the years but have left little of value underground are valued at much higher than their market rates.

One anecdote tells of a private owner who had previously failed to sell his old mine for US$1.5 million, but later received an evaluation of US$10 million from the state. In this situation, the complaints were from the executives of the state-owned enterprises who were made to buy the small mines.

When Chinese officials, powered with unchallengeable authority, truly believe they can outsmart the market in determining the value of a mine, anyone who wants to do business in China must get used to simply saying “Okay.”

CCP leaders hardly hear such complaints and hardly do they care. Their position has little to do with satisfying the people, and they know the courts are on their side. Right now they should be excited with their blueprint of a whole new landscape to China's coal industry. Within a year, the 2,200 coal companies in Shanxi Province will be cut down to about 100 and 70 percent will be fully or partially state-owned.

A decade ago, low coal prices gave inefficient state-owned enterprises little incentive to expand production. On the other hand, China's growing manufacturing industry needed a lot of coal to fuel it. Under those conditions, the CCP called for private investors to pour money into the industry and boost the country’s coal production.

Now, facing a rapid increase in coal prices, and with years of development of mining infrastructure, the regime has regained its absolute dominance in the industry with a single order. A canny move by the CCP.