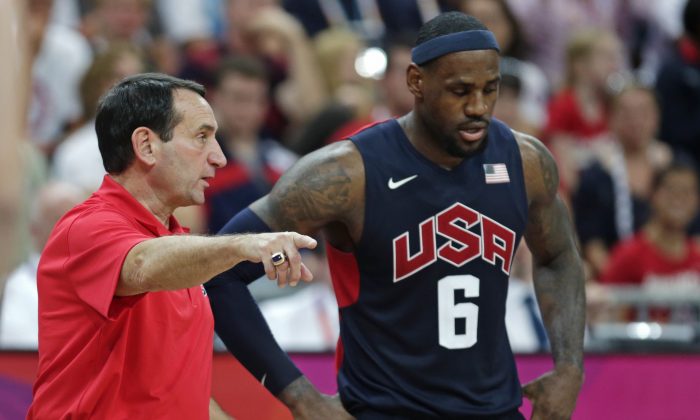 Krzyzewski knows James from coaching him on the U.S. men’s national basketball team. Coach K has even been described as LeBron’s “surrogate mentor.”

“We have a great relationship,” James told the Miami Herald several years ago. “We’ve been together since ’05, and our relationship has grown every year. I’ve grown from a young man into a man into a leader of that team. He’s helped me develop that. I give a lot of credit to him.”

Dwayne Wade added that Krzyzewski understood James and Kobe and the other guys who didn’t go the college. “And if you can pick one college coach to play for, obviously, Coach K tops that list for many. They took their relationship personal; he pushed him. And [James] didn’t get that experience. You can tell they both really loved it.”

Zagsblog reported that Coach K gave LeBron some advice while the star was figuring out whether to return to the Cavs or the Heat.

“I wished him luck, he looked like he was in control of the situation,” Coach K said in a conference call with reporters. ‘Do what you feel you need to do. You don’t owe anybody, you owe yourself.’ He didn’t need any advice from me.”

“I hope that the main thing is he serves as an example of what a star player, what a great player does in order to develop his greatness and keep it going,” Krzyzewski added.

“For Kyrie to be around that on a day-to-day basis, really all the teammates, but especially Kyrie because he can be that level of player. He’s very fortunate to have that.”