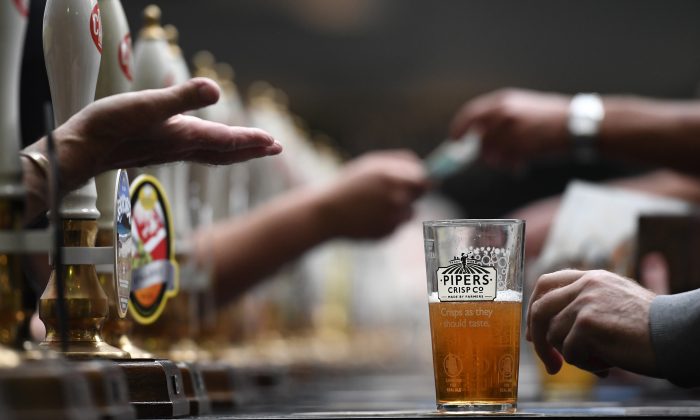 LONDON—Britain is facing a beer, meat, and crumpets crisis amid a carbon dioxide shortage, caused by an unprecedented shutdown of some factories which produce the gas.

Gas World, the trade journal that first reported the crisis, described it as the “worst supply situation to hit the European carbon dioxide business in decades.”

Carbon dioxide is used for carbonating drinks, stunning animals before they go to slaughter, and packaging a variety of food products, from salad to fresh meat to ready-made meals so the products have a longer shelf-life.

The problem comes as the demand for fizzy drinks and beer has increased in the country due to the hot weather and the England football team’s progression in the World Cup.

The UK has been hit particularly hard, with some of the main producers of the country’s carbon dioxide closing for technical reasons, while other plants were not in operation due to scheduled maintenance over the summer.

A factory in County Durham restarted on July 2, but Nick Allen, chief executive of the British Meat Processors Association, warned that even though the situation was improving, it would still take two weeks before carbon dioxide supplies returned to normal in the country.

The shortage has caused logistical problems and cost the industry money during peak time in the summer.

“We are hoping that the increase in CO2 production will happen quickly. … The industry will make sure it won’t happen again.”

The British Poultry Council said that the shortages in the gas sector could have a “potentially huge effect on British food production,” and the British Soft Drinks Association said the supply issues are “impacting a wide range of businesses across the food and drink sector.”

Last week, Wetherspoons, a chain that has about 900 pubs across the UK, said some of its branches temporarily ran out of John Smith’s and Strongbow cider, both made by the Dutch brewer Heineken. Luckily, the pubs didn’t run dry, as a range of other brands was in stock.

A spokesperson from Wetherspoons confirmed its supply would be back to normal by the morning of July 3, just hours before the England versus Colombia match.

Alex Mawhinney, 23, a recruitment worker in the UK, joked to Reuters that a beer shortage would cause riots on the streets.

“It will be a nightmare,” he said. “Especially as, it’s coming home, the football. So we are going to need the beer all the way to the final.”

The UK’s largest producer of crumpets, Warburtons, also suffered the effects of the shortage and was forced to suspend production at a number of its bakeries. Scotland’s biggest abattoir, Quality Pork Limited, announced it was unable to process pigs because of running low on carbon dioxide and had to send animals to slaughter south of the border.

McDonald’s Will Use Fresh Beef In Burgers