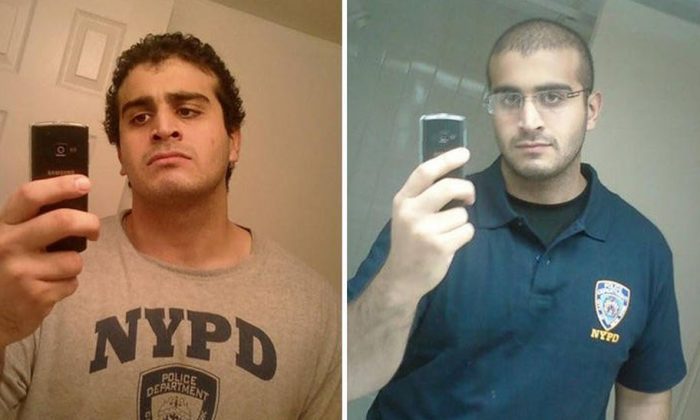 Co-worker says Mateen was 'unstable' and 'unhinged'
By Jack Phillips

A former co-worker of the suspect who shot and killed 49 people on Sunday in an Orlando club painted a grim picture of the man.

Daniel Gilroy, who had worked with Orlando nightclub shooter Omar Mateen for firm G4S Security, said that he complained several times that he was dangerous. Gilroy had worked with Mateen at a community service gate along with Mateen.

“[Mateen] had a lot of rage in him,” Gilroy told ABC News.

“When I say that he was unstable or unhinged, I mean this is a man who would lose his temper for no reason. He would kick walls, slap desks. I’ve seen him throw the chair across the room one time,” Gilroy said.

He said he lost contact with him in March 2015 when he quit his job.

“I didn’t want to be around him anymore,” Gilroy told the broadcaster. “I’m not surprised at what he did. I always knew he had something in him like that. And if I had to pick one person that would be capable of that, it would be him.”

Gilroy said Mateen made racist, anti-Semitic, sexist, and anti-gay comments. “He was always angry, sweating, just angry at the world,” he told the Los Angeles Times in a separate interview. Gilroy added that Mateen once openly said he wished “he could kill all black people” after seeing a black man drive past him.

In another interview with Florida Today, Gilroy said he complained to his employer several times. He said he quit because Mateen started stalking him and text messaged him 20 to 30 times per day. He also sent him 10 to 15 voice messages per day.

“I quit because everything he said was toxic,” Gilroy said Sunday. “And the company wouldn’t do anything. This guy was unhinged and unstable. He talked of killing people.”

Orlando shooter’s ex-wife: ‘This was a sick person’ https://t.co/jcovujODv7 pic.twitter.com/SXq8Ib3nLE

Mateen’s ex-wife Sitora Yusifiy told reporters he was a very violent person, saying she filed for divorce from him. “He beat me. He would just come home and start beating me up because the laundry wasn’t finished or something like that,” she told the Washington Post.

The father of Mateen, Seddique Mateen, gave interviews to several media outlets, saying he was polite and had no idea he would kill someone.

He added that his son was not an Islamic extremist, and he saw him on Saturday afternoon—just hours before the massacre. “It makes me upset, it makes me mad that I didn’t see anything unusual,” he said.

Another person who knew him, childhood friend Sean Chagani described Mateen as “different” and shy, noting: “It’s kind of hard to define.”

“Was he violent? By no means was he a violent person. By no means did he express violent tendencies or any aggression in any way,” Chagani told the network. “I guess everyone is a little bit different or quirky or unique. Omar was just different. I just don’t know how to put it.”

Related Coverage
Omar Mateen’s Father on Orlando Shooting: ‘I would have stopped him’

The FBI launched an investigation against him—one in 2013, and another in 2014—but authorities eventually cleared him for a concealed weapons carry permit in Florida as he worked for a security guard for G4S until this weekend, the Post reported.

John Kenning, G4S regional chief executive for North America, also sent out a statement following the attack: “We are cooperating fully with all law enforcement authorities, including the FBI, as they conduct their investigation. Our thoughts and prayers are with all of the friends, families and people affected by this unspeakable tragedy.”