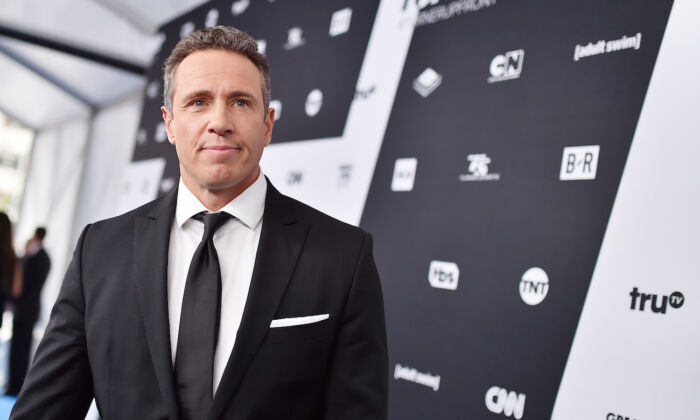 Chris Cuomo at The Theater at Madison Square Garden in New York City, on May 16, 2018. (Mike Coppola/Getty Images for Turner)
US News

Chris Cuomo said Wednesday that his suspension from CNN was “embarrassing.”

“I’ve been suspended from CNN … You know this already,” Cuomo told listeners to a radio show he hosts on SiriusXM. “It hurts to even say it. It’s embarrassing.”

Cuomo said he understood why he was suspended and why his colleagues were upset with him.

“It’s the last thing I ever wanted to do was compromise any of my colleagues,” he said.

Cuomo, among CNN’s top news anchors, was suspended indefinitely on Tuesday. The move comes after documents surfaced showing he was more involved than he had admitted to the company in trying to help his brother, then-New York Gov. Andrew Cuomo, amid sexual harassment and assault allegations against the Democrat official.

The details were released Nov. 29 by New York Attorney General Letitia James, a Democrat, who had ordered a probe into the allegations against Andrew Cuomo.

The documents comprise texts and other messages showing how Chris Cuomo had tapped his own sources in the media to find more information on his brother’s case and the women involved.

The new details are at odds with what Chris Cuomo told viewers in August, “I never made calls to the press about my brother’s situation. I never influenced or attempted to control CNN’s coverage of my family.”

Chris Cuomo had previously acknowledged in May that he had broken some of CNN’s rules in advising his brother about how to handle the sexual misconduct allegations from a public relations perspective. He also said he would not report his brother’s case on air.

CNN said on Tuesday the reason for Chris Cuomo’s suspension was because the documents released by James’ office “raise serious questions” in pointing to “a greater involvement in his brother’s efforts” than the network previously knew.

Andrew Cuomo stepped down as governor in August while denying the sexual misconduct allegations against him.

At the time, the New York Assembly had begun deliberations on an impeachment inquiry into his alleged sexual misconduct as well as his administration’s underreporting of COVID-19 deaths in nursing homes, as well as possible misuse of state resources in relation to a book he published about his handling of the pandemic. The impeachment inquiry was suspended days after Andrew Cuomo stepped down.

Separately, a criminal complaint charging Andrew Cuomo with a misdemeanor sex offense was filed on Oct. 28 in a New York court.