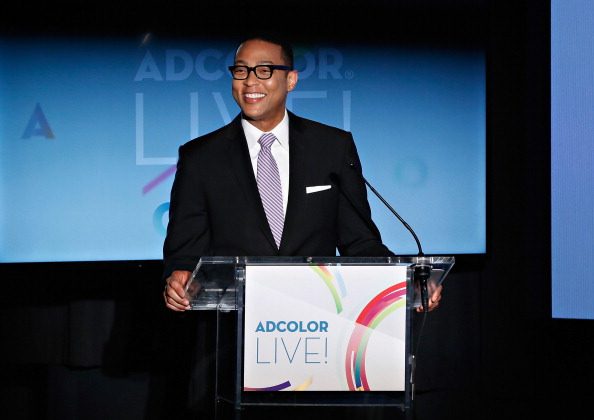 Don Lemon, the CNN anchor who has been criticized for his coverage of the Ferguson protests and Bill Cosby scandal, was photographed recently at a party in a new “scandal.”

Lemon, 48, is seen in the photos throwing “gang signs,” according to RadarOnline.com. However, it doesn’t appear that the hand signs are gang-affiliated in any way–just inverted “peace” signs.

These pics from Don Lemon’s crib in 2013. Bloop. pic.twitter.com/1rLI3lvwS1

He is also seen grabbing his crotch while making faces.

In the past month, Lemon has faced backlash on social media for his insensitive reporting on the Cosby scandal and Ferguson incident. One comment he made over Ferguson, “Obviously, there is the smell of marijuana in the air,” drew intense criticism.

But a few days ago, TMZ interviewed Lemon.

“That was a little crazy–I don’t get that,” he told the website. “I was just talking. There was a million things going on and everyone’s just hanging on one word. It’s flattering that people hang on every word I say but for that thing it meant nothing.”

“There was a guy that walked right by me smoking a joint and so I said obviously, it smells like pot,” he added.

Lemon also noted: “I don’t understand why you guys are covering me. I’m just a newscaster.”

Meanwhile, on CNN, Lemon said that it would be absurd to charge Michael Brown’s stepfather, Louis Head, for inciting a race riot.

“Talk about throwing gasoline on a fire,” Lemon said on CNN. “Imagine the irony that the man who shot your son and killed your son is not charged and then your husband or the stepfather is charged?”

“People would be outraged,” he continued. “I’m not sure what would happen in that community. Anything can happen but — I think they would be really, really silly, quite honestly, to charge this man considering what is going on there.”

Head was spotted on camera a few days ago telling a crowd of protesters: “Burn this [expletive] down!”