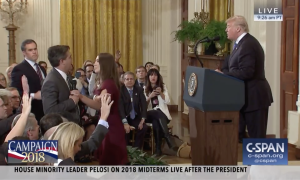 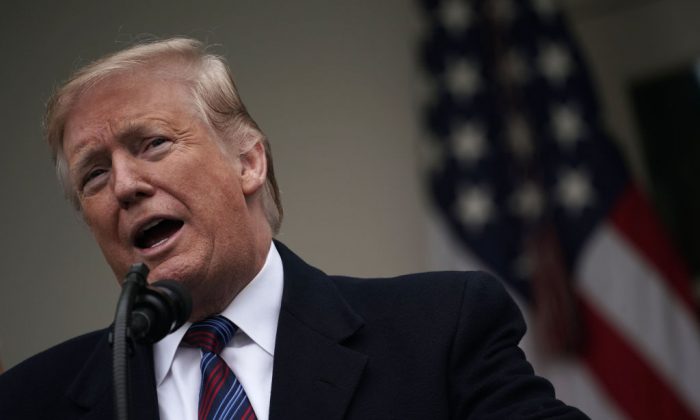 President Donald Trump speaks in the Rose Garden of the White House in Washington on Jan. 4, 2019. (Photo by Alex Wong/Getty Images)
Politics

A female CNN reporter got a microphone taken away from her after she refused to follow recently announced rules governing press briefings at the White House.

The rules were put into place in November 2018 after another CNN reporter touched a female White House intern who was trying to obtain a mic from him.

Like many political reporters, Jim Acosta is known for injecting his opinion into his questions. In the highly charged exchange with President Donald Trump that led to the rules, Acosta claimed that illegal immigrants with the migrant caravan wouldn’t be climbing the border wall when they reached the United States. The illegal aliens later did just that.

On Jan. 4, Kaitlin Collins questioned the president during a press conference at the White House.

After answering a question from another reporter, Trump called on Collins, who said: “You ran your campaign promising supporters that Mexico was going to pay for the wall.”

Collins claimed that Trump had always said the wall was going to be made of concrete, despite the president saying multiple times over the past several years that experts informed him they prefer steel slats or a wall they can see through.

“You just said earlier that the wall could be made of steel and right now our government is shut down over a demand from your administration that the American taxpayer pay for the wall,” Collins continued. “So how can you say you are not failing on that promise to your supporters?”

“A very nice question, so beautifully asked, even though I just answered,” Trump said in a sarcastic tone. Collins then interrupted the president as he tried to add to his answer.

“Excuse me, are you ready?” Trump said. “I just told you that we just made a trade deal and we will take in billions and billions of dollars, far more than the cost of the wall. The wall is peanuts compared to the value of this trade deal to the United States.”

“If I build a wall, and the wall is made out of steel instead of concrete, I think people will like that. And here’s the other good thing, I’ll have it done by the United States steel corporation, by companies in our country,” Trump said.

After Trump’s lengthy answer to her question, Collins began shouting another question about the new trade deal. Trump had already called on another reporter, but Collins continued shouting as a White House staffer took the mic away from her.

The new rules governing briefings at the White House stipulate that reporters are limited to one question; if a reporter has a follow-up question, the official taking the question would have the discretion about whether to grant the follow-up query; and after which, the reporter is expected to yield the floor, which includes surrendering the microphone.

According to White House press secretary Sarah Sanders, failure to abide by any of the three rules may result in suspension or revocation of a reporter’s hard pass.