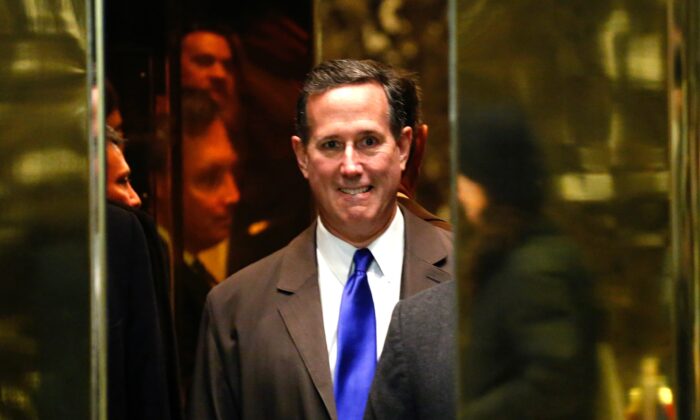 Rick Santorum arrives for a meeting with U.S. President-elect Donald Trump at Trump Tower in New York on Dec. 12, 2016. (Kena Betancur/AFP via Getty Images)
US News

Santorum, a former two-time presidential candidate, sparked controversy after saying in a political speech on April 23 that “there isn’t much Native American culture in American culture.”

American settlers “birthed a nation from nothing,” Santorum said on the founding of the United States at a summit held by the conservative group Young America’s Foundation.

He said, “there was nothing here” when American settlers arrived, seemingly ignoring the history and culture of the Native American people.

“It was born of the people who came here pursuing religious liberty, to practice their faith, live as they ought to live, and have the freedom to do so,” he added.

His remarks sparked backlash from groups that advocate for Native Americans, including the National Congress of American Indians, whose president Fawn Sharp called Santorum “an unhinged and embarrassing racist who disgraces CNN and any other media company that provides him a platform.”

“To correct the record, what European colonizers found in the Americas were thousands of complex, sophisticated, and sovereign tribal nations, each with millennia of distinct cultural, spiritual, and technological development,” Sharp said in a statement.

Sharp warned that CNN may face a boycott from more than 500 tribal nations and its allies worldwide if the station didn’t fire Santorum.

The Native American Journalists Association also joined called for his dismissal, and that it “cautions Native American and Alaska Native reporters from working with, or applying to jobs at, CNN in the wake of continued racist comments and insensitive reporting directed at Indigenous people.”

Santorum apologized on Chris Cuomo’s CNN show on May 3, saying that he “misspoke” and that he “was not trying to dismiss Native Americans.”

“People say I’m trying to dismiss what happened to the Native Americans,” he said. “Far from it. The way we treated Native Americans was horrific. It goes against every bone and everything I’ve ever fought for as a leader in the Congress.”

“When I signed on with CNN, I understood I would be providing commentary that is not regularly heard by the typical CNN viewer,” Santorum said in a Twitter post Saturday. “I appreciate the opportunity CNN provided me over the past four years. I am committed to continuing the fight for our conservative principles and values.”

Responding to news of Santorum’s dismissal, Sharp wrote on Twitter: “It wasn’t a matter of if, but when. Justice is served.”

The Epoch Times has reached out to CNN and Santorum for comment.