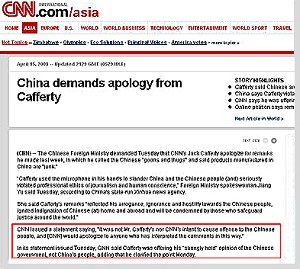 The Chinese Communist Party (CCP) has a long history of intentionally mixing up concepts of the Party, country, government and people, so as to incite Chinese people's “patriotic sentiment” to instigate or divert a crisis when necessary. Instead of introducing a theory about why this is, I would just like to provide some facts to serve as practical examples for your reference.

CNN recently made an apology to the CCP over its recent comments on the Beijing Olympic torch relay. If one examines it more closely, it should be obvious that it was all a farce.

On April 17, 2008, the CCP-controlled Xinhua News Agency ran an article headlined “China Continues to Urge CNN to Offer Sincere Apology over Malicious Attacks on Chinese People,” in which Foreign Ministry spokeswoman Jiang Yu said, ” We demand CNN and Cafferty himself take back his vile remarks and apologize to all the Chinese people.”

This all goes back to the afternoon of April 9, when CNN broadcasted a live report on the Beijing Olympic torch relay in San Francisco. According to the Xinhua News Agency, when CNN host Jack Cafferty was making a comment about Sino-American relationships, he said, “I think they (the Chinese authorities) are basically the same bunch of goons and thugs they have always been over the past 50 years.”

Soon after, the Chinese Foreign Ministry condemned Cafferty's actions and summoned CNN's Beijing executives to review Cafferty's vile remarks. CNN immediately became the target of condemnations by people across China. From some of the Xinhua website article titles alone, one can tell that the matter is indeed very serious.

Such titles include: “CNN Host Refers to Chinese as 'Goons'”; “CNN Incites Racial Discrimination, Shame to Refer to Itself as Human Rights Defender”; “Who is Trash: Chinese Products or CNN Hosts?”; “Does CNN Host Insult Chinese Due to Ignorance or Shamelessness?”; “CNN Host's Insults Reveal Racism.”; “The Voices of Justice Around the World Should Condemn Cafferty's Nazi-like Remarks” and “CNN Host Insults Chinese, Shame on the U.S. Media.”

CNN issued a statement saying, “it was not Mr. Cafferty's nor CNN's intent to cause offense to the Chinese people, and [CNN] would apologize who has interpreted the comments this way.”

In the statement issued Tuesday, CNN said Cafferty was offering his “strongly held” opinion of the Chinese government, not China's people, adding that he clarified the point Monday.

CNN issued a statement on April 15, saying Cafferty was sharing his strong opinion of the Chinese Government, not China's people. It also said, “It should be noted that over many years, Jack Cafferty has expressed critical comments on many governments, including the U.S. government and its leaders.” In its statement, CNN added: “CNN would like to clarify that it was not Mr. Cafferty's, nor CNN's, intent to cause offense to the Chinese people, and would apologize to anyone who has interpreted the comments in this way.

Given that, we have got a clear picture of the incident. It's similar to a scene like this: Jack said something about Tome, and Tom, bringing Peter with him, questioned Jack for the “maliciously attack.” Jack then explained to Peter that the comments are only about Tome, not Peter. So what do you think Tom would say? You'd think he would say, “So you were talking about me! Then you should apologize to me!”

But in the actual incident, the CCP, who's playing Tom, have been acting weird — it behaves more like Peter: “Okay, so you were talking about me. I'm so forgiving and I'm not asking for an apology. However, you have to apologize to Peter again. Don't say it's about me any more, because if you say so Peter will stop being angry. Why don't you just say you attacked Peter so you guys can settle it up and leave me out of this.”

Of course, the CCP has its official routine interpretations. Jiang Yu said, in reference to CNN's April 15 statement, “CNN turned its attack on the Chinese government to try to sow division between the Chinese government and the people.” Therefore, “It's totally unacceptable.” She intensified her remarks and argued that “CNN's statement not only insulted the Chinese people, but also defied the conscience and justice of humankind.”

Jiang's logic was truly hard to follow. No matter what Jiang said, she avoided recognizing that the defamation was targeted at the CCP. Near the end of her statement, Jiang reiterated that the Chinese people would not tolerate humiliation and demanded CNN deliver a sincere apology to the Chinese people.

The Foreign Affairs Ministry knew full well that media had been “defaming” and “challenging” the CCP. However, the Ministry failed to defend the regime which it represents and demonstrated no courage to ask CNN for a direct apology to the CCP. Instead, the Ministry's reaction has been confusing and incoherent—it reiterated that CNN should apologize to the Chinese people, an innocent bystander in all of this. Why is it so strange?

The reason is clear. In fact, the CCP has always tried to incite national sentiment among its people. Its hope is that any condemnation of the CCP may be converted into derogatory racial slurs against the Chinese people. The CCP likes to hide backstage. If it's exposed on stage, it wouldn't be possible to instigate patriotism among the Chinese people.

This time, the “CCP” and the “Chinese people” were accidentally differentiated by CNN, leaving the regime in an extremely awkward situation. In order to utilize the Chinese people as the scapegoat for its evils, however, the CCP couldn't do anything other than play the fool so as to spare itself. This is exactly one of the ways the Chinese people have been exploited by the CCP over the past fifty years.

Anyhow, it is certain that the CCP mishandled this case. It has been searching for ways to get itself out of this dilemma. There have been articles, accusing Cafferty of adopting a preemptive and boorish style of hosting TV programs. “He is always deliberately criticizing to arouse disputes so as to secure viewer ratings.”

While the CCP continues attempting to fool the Chinese people, the best way for them to safeguard their self-respect and dignity, and to demonstrate true patriotism is to quit all of the organizations associated with the Chinese Communist Party.