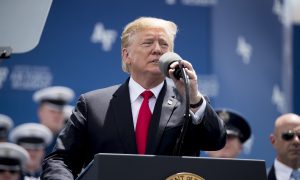 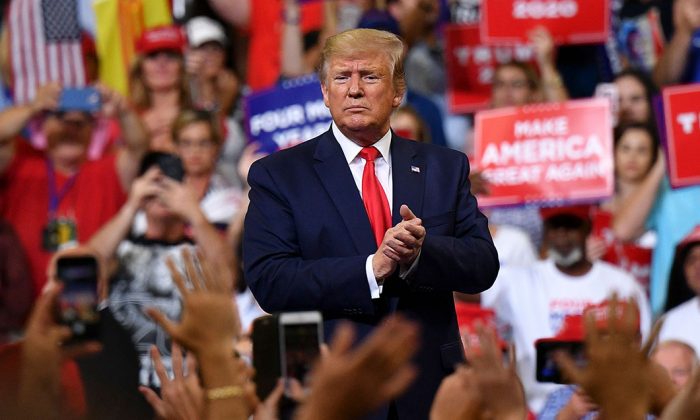 CNN and MSNBC made the shocking decision to stop broadcasting the U.S. president’s rally in Orlando, Florida shortly after people in the audience began chanting “CNN sucks.”

The crowd started its anti-CNN chant after Donald Trump described his surprise victory in the 2016 U.S. presidential election as a “defining moment in America history.”

“Ask them right there,” he said as he pointed to the press box and referred to widespread media coverage that incorrectly predicted then Democratic presidential candidate Hillary Clinton would defeat Trump in the previous election.

Trump smiled, turned around, and waited for everyone to stop chanting before he added his thoughts on the matter.

“By the way that is a lot of fake news back there, that’s a lot, that’s a lot,” he said as the audience loudly cheered in agreement.

The president then compared the general public’s lack of confidence in the credibility of many major media companies to controversial statements made at the Academy Awards.

“You know what I say? The amount of press we have tonight reminds me of the Academy Awards before they went political and their ratings went down the tubes,” Trump said.

While Trump was still in the middle of speaking about the election being American voters’ chance to reclaim the government, CNN interrupted the speech and Anchor John Berman spoke over Trump.

“All right, we’ve been watching the president kick off his reelection bid, he’s been on stage for about six minutes,” Berman said in the broadcast. “Within two minutes he did talk about the economy, within four minutes it was attacks on the media.”

The anchor continued to speak over the president, criticizing Trump for raising the same issues he has discussed since the year 2015.

“He was talking about a bright, rosy future but then quickly reverted to some of the same themes he’s been talked about since he began running four years ago,” Berman said.

MSNBC also dropped live coverage of the president’s rally even though Trump was still delivering his speech to the crowd, and only Fox News aired the full speech, according to Newsweek.

CNN aired the first 6 minutes of President Trump’s launch speech tonight, then cut away and never went back.

Analytics firm mediaQuant estimated Trump attracted free publicity on cable news networks and other media worth a total of $5.6 billion in the lead-up to his last presidential election, according to Newsweek.

The magazine also revealed Hillary Clinton supporters criticized the mainstream media for giving him a platform after Trump won the presidency in late 2016. MSNBC hosts Joe Scarborough and Mika Brzezinski were ridiculed for devoting several hours of free air time to Trump before the year 2016.

It is unknown whether Trump will be able to amass the same level of free publicity as in 2016.