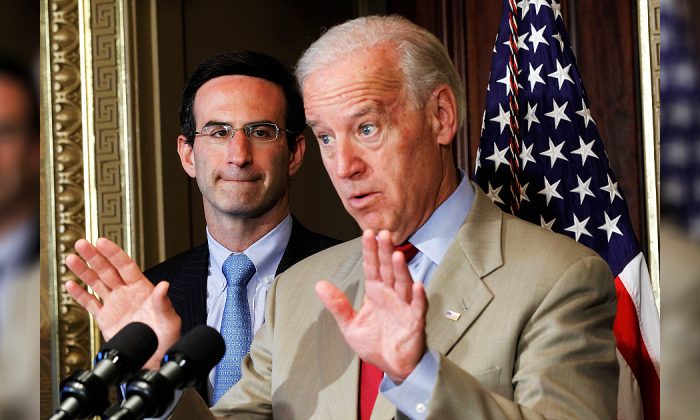 U.S. Vice President Joseph Biden (R), joined by Office of Management and Budget Director Peter Orszag, speaks on waste, fraud, and abuse in the government during an event at the Eisenhower Executive Office Building of the White House June 18, 2010 in Washington, DC. (Alex Wong/Getty Images)
2020 Election

A CNN political analyst called out 2020 Democratic candidate Joe Biden during an appearance on the network on July 8 for claiming Russian meddling didn’t happen “on my watch.”

Political analyst David Gregory, who had previously interviewed Biden, said he did not think the former vice president is displaying a “readiness to run” when asked to analyze Biden’s handling of his recent controversy relating to his comments on segregationists.

He then went on to criticize Biden for making an inaccurate claim during his interview with CNN’s Chris Cuomo, which was aired on July 5.

“The other piece of this, too, I mean like when he said to Chris as well. He’s like, oh well the Russian interference, it didn’t happen on our watch, when that’s exactly whose watch it happened on,” Gregory said.

“It just shows and I’ve seen it first hand, when he gets in interviews and he gets going, he can make lots of mistakes. I think we may have just seen the beginning of it,” he added.

Biden made the claim to Cuomo while expressing his disagreement about the current foreign policies and accused President Donald Trump of “dissing” allies and “embracing thugs.”

“Look at what’s happened with Putin. While he—while Putin is trying to undo our elections, he is undoing elections in — in Europe,” Biden said.

After the Mueller report was released, the Republican National Committee accused the Obama administration of doing “absolutely nothing about it” despite being aware of the interference.

“Obama chose not to “strike back” because he wanted Russia to cooperate with the Iranian Nuclear deal,” the statement said. “Not only did Mueller confirm that there was no collusion, we also learned the full extent of how much the Obama administration failed to act while Russia messed with America’s electoral process.”

Obama’s response to the meddling was also criticized by top Democrat on the House Intelligence Committee Adam Schiff, who said the Obama administration “should have done a lot more when it became clear that not only was Russia intervening but it was being directed at the highest levels of the Kremlin,” reported The Guardian in 2017.

Along with Gregory, Biden received backlash from other prominent figures and politicians.

“Joe Biden claims Russian election interference wouldn’t have happened on his watch or Obama’s watch. Seriously, Joe?? It DID happen on your watch and Obama’s watch!!” House Minority Whip Steve Scalise (R-La.) said in a Twitter thread he posted to counter the presidential candidate’s claim.

Seriously, Joe?? It DID happen on your watch and Obama’s watch!!

“Russian interference in America’s elections happened on Obama and Biden’s watch. That’s irrefutable. Even CBS News admitted Obama knew about Russian meddling,” he wrote in a post accompanied by a CBS article.

“PANTS ON FIRE #fakenews” he wrote.