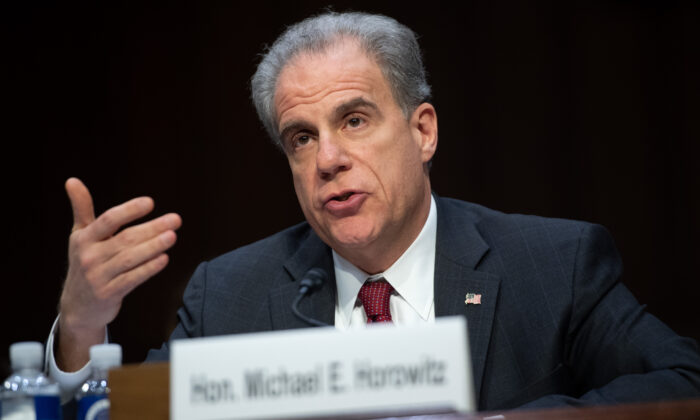 CNN has added an editor’s note to a story that claimed former Donald Trump campaign chairman Paul Manafort was wiretapped both before and after the 2016 election after Department of Justice Inspector General Michael Horowitz debunked the claim.

The story included no evidence of the extraordinary claim and the language of the writing suggested none of the reporters viewed the FISA warrants they reported as having been obtained against Manafort.

Horowitz said in a report reviewing FISA warrants this week that FBI agents “did not seek FISA surveillance of Manafort.”

His team wrote, “We are aware of no information indicating that the Crossfire Hurricane team requested or seriously considered FISA surveillance of Manafort.”

Horowitz’s team conducted over 170 interviews involving more than 100 witnesses and reviewed more than one million documents from the Department of Justice and the FBI.

Instead of retracting the 2017 story, which was hyped by reporters and lawmakers, CNN this week added an “editor’s note” acknowledging Horowitz’s findings but not admitting any fault.

“On December 9, 2019, the Justice Department Inspector General released a report regarding the opening of the investigation on Russian election interference and Donald Trump’s campaign,” the note stated.

CNN corrected and updated the story after Comey’s testimony was released.

That same month, three journalists resigned after the outlet was forced to retract a story citing a single anonymous source that claimed Congress was investigating a “Russian investment fund with ties to Trump officials.” CNN said some editorial processes were not followed.

Shortly after Trump was inaugurated, the company said Nancy Sinatra was “not happy” her father’s song was used at the event. Sinatra said the story wasn’t true. “That’s not true. I never said that,” she wrote. “Why do you lie, CNN?…Actually I’m wishing him the best.”

That story was updated with Sinatra’s remark but still says that Sinatra “has never been a fan” of Trump. A tweet with the original share line was never deleted.

Later in January 2017, CNN reporter Jeff Zeleny claimed that the White House had set up Twitter accounts for two different judges in a bid to keep his nomination to the Supreme Court secret. Zeleny later corrected his report but his original tweet remains live.

CNN employees also got a number of stories wrong about Trump, including a report in December 2017 that claimed Trump’s son Donald Trump Jr. was told of the Wikileaks email release in advance. Reporters Manu Raju and Jeremy Herb later issued a correction, noting they got the date wrong, undercutting the thrust of the article.

The errors continued throughout 2018 and this year. In July, CNN didn’t include the fact that a lawsuit against Trump was dismissed. It later issued a correction.