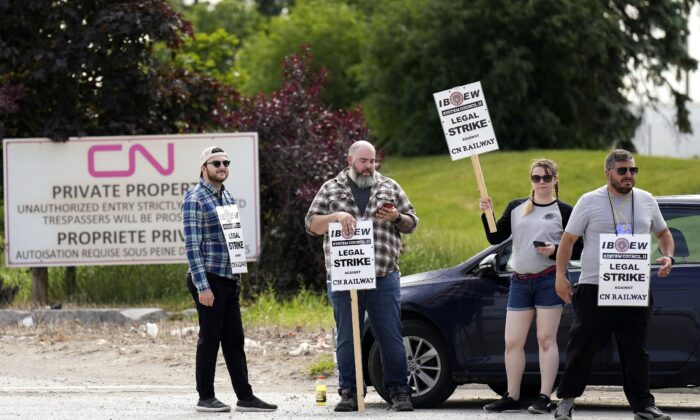 Striking CN rail workers at the CN MacMillan Yard in Vaughan, Ont., on June 20, 2022. The International Brotherhood of Electrical Workers says signal and communication workers have walked off the job across the country. (The Canadian Press/Nathan Denette)
Canada

The longer the strike at Canadian National Railway lasts, the deeper the difficulties and the longer the recovery time for already-strained supply chains, says a former railroad employee and industry consultant.

Some 750 CN signals and communications workers represented by the International Brotherhood of Electrical Workers (IBEW) went on strike on June 18.

In an open letter to IBEW employees on June 20, CN executive vice president and chief operating officer Rob Reilly said that CN began negotiations with the union in October 2021 and that the company had “met or exceeded every one of the union’s demands.” These include better scheduling to ensure two consecutive days off, an increase in the all-inclusive expense allowance, overtime procedures based on seniority, and more.

The latest offer also includes a 10 percent increase in wages over three years, better health coverage, higher meal per diems, and a doubling of mileage reimbursements when travelling for business.

“While we are disappointed in the current situation, we remain open to resolving the outstanding issues through an agreement or through binding arbitration. I sincerely hope we can come to a resolution as soon as possible,” Reilly wrote.

In a press release, CN said its operational contingency plan “allows the Company to maintain a normal level of safe rail operations across Canada and serve its customers for as long as required.”

“They will, of course, have non-union supervisory people filling in for the rank and file who are represented by the IBEW, but it can’t go on forever. So let’s hope they resolve it, because over time, it will have an impact on the operations,” Gormick said in an interview.

“This could drag on for several weeks. If it does, then we’re going to see problems.”

Railways Now ‘Not as Resilient’

In April, IBEW train control, signals, and communication maintenance workers for the Toronto Terminals Railway went on strike. The work action, which began April 20, concluded May 3 when IBEW agreed to binding arbitration. Gormick hopes the union’s latest dispute will be resolved quickly.

In November 2019, more than 3,000 CN conductors and yard service employees represented by Teamsters Canada held an eight-day strike. The job action created difficulties for businesses relying on the railway, which hauls 300 million tons of freight over its 20,000-mile network each year.

Gormick said the effects of the 2019 strike reverberated after the job action ended, and a long one this time would do the same.

“There were the blockades in early 2020, and then COVID hit. [With] all the stripping of the physical assets of the railways and the human resources, the railways are not as resilient as they used to be. It’s not easy for them to recover,” he said.

“You’ve got a backlog of traffic, you’ve got things that have been sitting waiting. And we’re in a stage where … our supply chains are stressed badly [already], so the last thing that you need is a major strike.”

Poor rail service in the early part of 2022 prompted complaints to the Canadian Transportation Agency from the agriculture sector. Mark Hemmes, president of Quorum Corporation in Edmonton, monitors rail delivery of farm commodities in Canada. He says the bottlenecks in service for his sector are resolved for now.

“The bottom line is that this labour disruption isn’t going to have much of an effect on anything. So we’re in pretty good shape. If this would have happened in the dead of winter, I’d have a whole different mindset,” Hemmes said in an interview.

“They’re doing OK insofar as keeping up with what the demand is. Right now, everything is so soft that a strike really doesn’t have that much of an impact.”

Nelson Wiseman, political science professor emeritus at the University of Toronto, says that while rail strikes have been big economic, labour, and political issues in past decades, he does not expect this one to rank at that level.

“Now that negotiations have failed, I expect the federal government to appoint a mediator, but the strike could go on for some time before the government would consider intervening with legislation,” he said. “If there is a holdup in normal operations for any sustained period of time or safety issues arise, that would push the government to act sooner.”

Gormick says railways already have problems recruiting this generation to their workforce, so improved compensation and working conditions for striking workers and other employees could be mutually beneficial.

“If there’s a signal problem, if there’s a great crossing circuit problem, they’re the ones that get the calls to go out in the middle of the night and all weather to do this sort of thing. So it’s a tough job,” he said.

“With the operating crews, it’s almost impossible to guarantee them anything that looks like a normal working life. Friends that are still out there … complain about the almost total unpredictability of it now. It’s not going to be easy to hire people to work on a railway because it’s a tough way to make a living.”