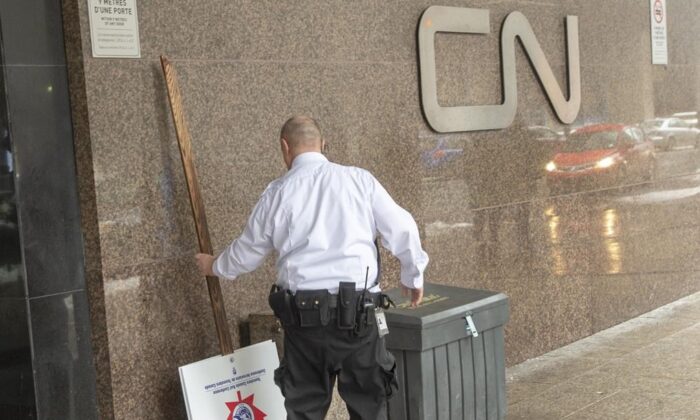 MONTREAL—The strike at the country’s biggest railway has entered its fourth day with no resolution in sight as round−the−clock negotiations continue under the watch of federal mediators.

The Teamsters union said on Nov. 22 that “no substantive progress has been made” since 3,200 workers hit the picket lines early on Nov. 19.

The union claims Quebec’s propane shortage “appears to be largely manufactured” by Canadian National Railway Co. amid rising pressure from industry and Prairie premiers to reconvene Parliament ahead of schedule and pass back−to−work legislation.

Premier Francois Legault said on Nov. 21 that the province is days away from running out of propane, which heats hospitals and nursing homes, and fuels operations in agriculture and mining.

Tensions rose between CN Rail and the Teamsters Canada Rail Conference as progress stalled in Montreal late in the week.

The union framed CN’s decision to transport freight other than propane as “a business decision.” The Montreal−based railroad operator continues to run some trains using locomotive engineers and supervisors, who remain on the job.

CN Rail rejected the union’s claim that the strike concerns workplace health and safety, suggesting instead that it revolves around worker compensation.

“While the current average salary of a Canadian conductor is $114,000 plus benefits, including a defined benefits pension plan, the union is seeking wage and benefit improvements beyond those negotiated this year with Unifor and another bargaining unit of the TCRC,” CN said in a release.

CN said it has offered to enter into binding arbitration, with a neutral arbitrator chosen by the parties or appointed by the federal government.

A prolonged disruption to CN Rail—a critical artery for imported consumer goods and a key export channel for commodities ranging from grain to fertilizer and forestry products—could dent the country’s economy.

The strike could cost the Canadian economy up to $2.2 billion if it lasts through the end of the month, and up to $3.1 billion if it continues until Dec. 5, according to TD senior economist Brian DePratto.

“Should this strike drag on, it would clearly be disruptive to the Canadian economy and to the company in question,” said Avery Shenfeld, chief economist at CIBC Capital Markets.

“An extended strike risks seeing a near flattening in economic activity to finish the year,” he said in an email, noting fourth−quarter GDP growth had been expected to hit one per cent.

Nearly two−thirds of propane travels along the tracks at some point—in Quebec, about 85 percent arrives by rail—with the rest shipped by truck, according to the Canadian Propane Association.