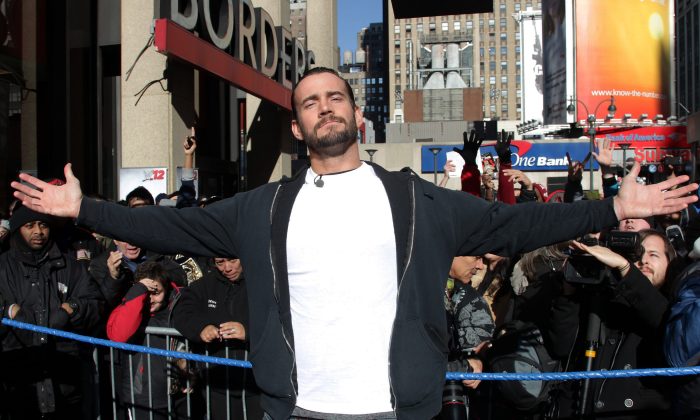 CM Punk was slammed by a longtime punk rock singer Ben Weasel of the band Screeching Weasel this week during a show.

He later posted on Facebook that “it’s time to teach him a lesson.”

“Who’s CM Punk, you ask (along with the rest of the world)? Some washed up, burnt-out, has-been former wrestler who’s been reduced to hanging out on Twitter challenging guys half his size to fist fights, that’s who. I wish I was joking,” he wrote.

“Yours truly was targeted by the big goof when he saw a YouTube video purportedly showing me hitting two women while on stage in Austin TX a few years ago. In fact I was hugging those ladies with my fists, not that it’s any of his business. But the slobbering nitwit still challenged me to a fight, I guess so women will feel like he’s a really great guy,” he added.

The one and only….. Ben Weasel #Seductive pic.twitter.com/ejeFIfUmRH

Weasel then said that he is “challenging all our female fans … to stand up with us on stage at our show in Chicago on 11/22 and challenge the big goon to a fight.”

“This is not a joke. If you’re up to the challenge and can throw a solid punch, or even just kick a gym-muscled bully … post in this thread. Our road manager Kotton will contact you if we can use your help. Let’s shut this buffoon’s mouth once and for all!” he added.

Meanwhile, there’s been an update on the rumors that Punk’s wife, AJ Lee–the Divas Champion–will retire or leave the WWE. One rumor said she would leave the promotion as early as Sunday after the Survivor Series.

According to WrestleZone, “Dave Meltzer actually denied this would happen in this week’s Wrestling Observer Newsletter, saying the rumor of AJ Lee leaving WWE is just not true.”

“AJ is still being advertised for WWE events after Survivor Series, including the WWE TLC pay-per-view on December 14th,” it adds.

There’s been no source confirming that she is leaving the WWE. Lee also has not mentioned the rumors.