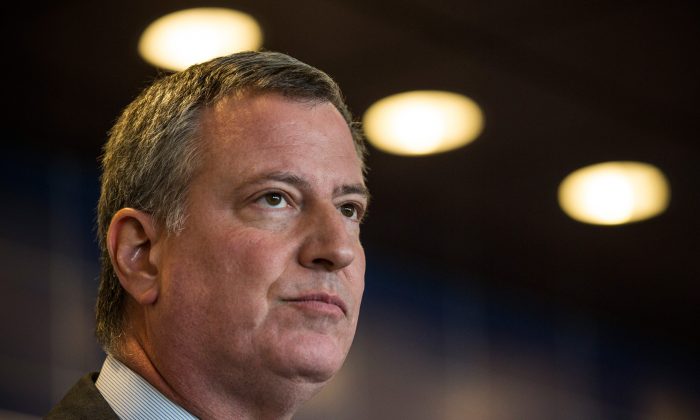 New York City Mayor Bill de Blasio speaks at a press conference after witnessing police being retrained with new guidelines at the Police Academy on December 4, 2014 in Queens borough of in New York City. (Photo by Andrew Burton/Getty Images)
News

Part of historic Stand for Tenant Safety package, which includes 11 bills that increase protections for tenants
By Press Release

NEW YORK—Today, as part of the signing of the Stand for Tenant Safety package, Mayor de Blasio signed a groundbreaking bill authored by Council Member Margaret S. Chin that limits self-certification for landlords who use illegal construction to push tenants out of their homes. Intro 918 increases DOB inspections for construction applications at buildings where more than 25 percent of units are occupied, and where landlords have been guilty of tenant harassment.

“For far too long, bad landlords have relied on construction as harassment to make tenants’ lives miserable in an effort to force them out of their homes and earn a quick buck. By signing this bill into law, we are giving working families and seniors new protections against greedy building owners who expose their tenants to inhumane and hazardous living conditions,” said Council Member Margaret S. Chin, lead sponsor of Intro 918-A. “I thank the Stand for Tenant Safety advocates, including Cooper Square Committee and the Stop Croman Coalition, as well as my bill co-sponsor Council Member Menchaca, for their work to further empower tenants in the fight against harassment.”

Introduced in 2015, Intro 918 is a component of the Stand for Tenant Safety (STS) package, a historic legislative effort that increases protections for tenants citywide.

Earlier that year, in response to an egregious case of construction harassment by landlords at 90 Elizabeth Street, Council Member Chin fought alongside tenants and advocacy groups to pressure DOB to apply a stop work order. Unfortunately, that building is just one example of landlords harassing their tenants through the practice of often dangerous, hazardous, and unnecessary construction.