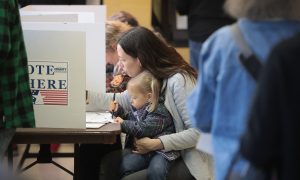 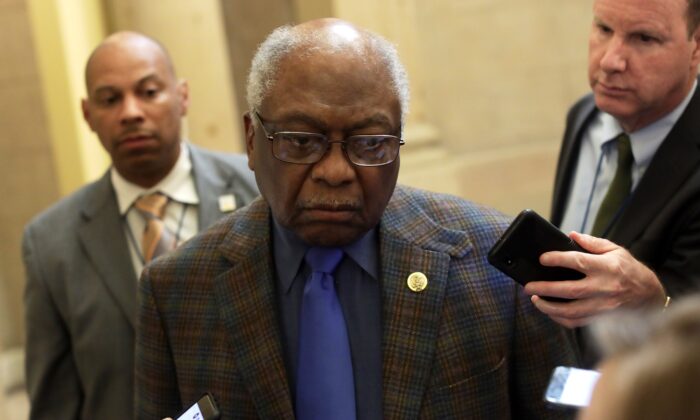 In an October 2020 Twitter post, Clyburn said voter ID is a form of voter suppression but in a July 4 CNN interview with “State of the Union” on Sunday, Clyburn claimed, “We are always for voter ID.”

“We are always for voter ID. We’re never for disproportionate voter ID. When you tell me that you got to have a photo ID and a photo for a student activity card is not good. But for a hunting license, it is good. That’s where the rub is. I don’t know of a single person who was against ID’ing themselves when they go to vote. But we don’t want you to tell me my ID no good because I don’t own a gun and I don’t go hunting,” added Clyburn.

When asked if he was saying he draws the line at photo ID, he said, “No, I’m drawing the line at an equitable ID—any kind of ID that [you can get if you’re] 94 years old, you don’t drive anymore, but you’re still watching the news every day and you want to keep up, you want to vote. You don’t have a photo ID, you ought to be able to vote with whatever ID that you have, one being your voter registration card.”

While Clyburn now says that he has always supported a voter ID requirement, his comments from last year indicate otherwise. In an October Twitter post he wrote that long lines at polling sites, closed polling locations, voter ID laws are “all voter suppression.”

Clyburn has also been critical of Sen. Joe Manchin’s (D-W.Va.) proposal to compromise on H.R. 1, the Democrats’ sweeping voting reform bill. Manchin has been trying to make changes to H.R. 1, also called the “For the People Act,” so it will get bipartisan support in the Senate, where there is an equal number of Democrat and Republican senators.

Manchin suggested changing some of the more extreme elements of H.R.1, like removing requirements for ID to vote; Manchin suggested mandating that states check for some form of ID, but authorize election officials to accept ID such as a utility bill as proof of identification. The compromise was endorsed by Stacey Abrams, a key Democrat spokesperson on election law, but rejected by Republicans who insist on photo ID requirements.

Rep. Dan Crenshaw (R-Texas) said in March that H.R.1 makes elections less secure because it does not address the issues that millions of Americans were concerned about in the 2020 elections, like universal mail-in ballots, and careless voter ID verification processes.

“Instead, this bill makes permanent the problematic election practices that cause distrust. For example, ballot harvesting, which creates a serious chain-of-custody issue; universal mail-in voting without safeguards, which creates the kind of chaos where your ballot ends up in somebody else’s hands; or forcing states to disregard their own voter ID laws and use sworn statements instead of an ID,” said Crenshaw.

Besides Clyburn other Democrats have also recently flipped their position on requiring identification to vote.

In June, Sen. Raphael Warnock (D-Ga.) claimed that he has never been opposed to voter ID legal guidelines.

“And in fact, I don’t know anybody who is—who believes people shouldn’t have to prove that they are who they say they are,” the Georgia Democrat continued. “But what has happened over the years is people have played with common sense identification and put into place restrictive measures intended not to preserve the integrity of the outcome, but to select certain groups.”

However, Warnock’s comments contradict previous statements by the senator showing he has rejected voter ID for years.

About two years ago, he shared his thoughts in an op-ed article that was published in the Atlanta-Journal Constitution, titled, “Attacks on voting hit at the soul of our democracy,” referring to “onerous voter ID laws or this deeply flawed process of ‘exact match'” that he claimed to be “particularly biased against women and voters of color.”

The Epoch Times has contacted both Clyburn and Warnock for comment.