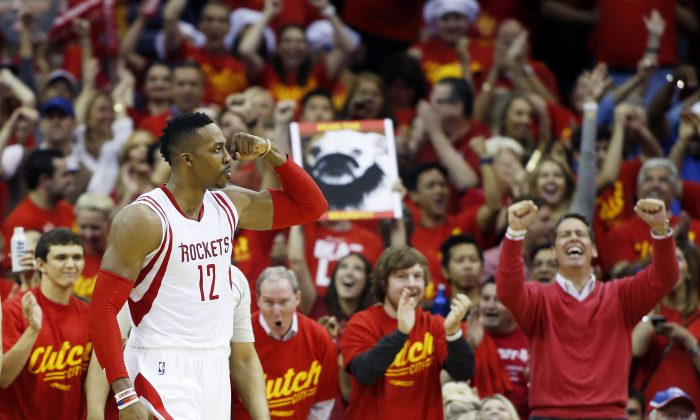 Dwight Howard and the Houston Rockets are back in the conference finals for the first time since 1997. (Scott Halleran/Getty Images)
NBA

Clutch City Back in Business?

The Clippers, who had a commanding 3–1 series lead over the Rockets after dominating Games 3 and 4 in Los Angeles, were summarily dismissed in Game 7 on Sunday night in Houston to complete the historic collapse—or Rockets comeback, depending on your perspective.

Houston never trailed in Game 7 after their monumental comeback to win Game 6 when they turned back a 19-point second-half road deficit, to force the do-or-die game.

While the Clippers are left to ponder what held them back from advancing to what would have been the franchise’s first-ever trip to the conference finals, the second-seeded Rockets are gearing up for what looked like an unlikely matchup with top-seeded Golden State.

In other words, the wild Western Conference playoffs actually went according to plan—but just barely, as it took one of the great escapes to happen. An escape that’s happened before in Houston, aka “Clutch City.”

Twenty years ago, Houston faced elimination five times in the first two rounds—including three in a row in rallying from a 3–1 deficit against the second-seeded Phoenix Suns—and won all five before blowing past the Spurs in the conference finals and then sweeping the Magic for the title.

The most impressive of those pressure-filled wins, though, was the Game 7 victory over the Suns—in Phoenix—where the Rockets trailed by 10 points at the break only to come back and win.

Of course, they were the highly regarded defending champions at the time—a title that came with an asterisk too many because of Michael Jordan’s retirement that opened up the playing field again.

But the team had a number of crunch-time performers who were undaunted by the pressures of the postseason—in fact they thrived on it.

Starting point guard Kenny Smith, now the TNT commentator, hit one of the big threes of that postseason when he put one through at the end of Game 1 in the NBA Finals to force overtime as the Rockets capitalized on four straight free-throw misses by Orlando’s Nick Anderson.

Reserve guard Mario Elie made a name for himself when his late-game three was the dagger that slayed the Suns in Game 7 of the conference semis.

Starting power forward Robert Horry, aka “Big Shot” Rob, was always at his best in the postseason. Although most of his playoff shooting heroics happened later in his career with the Lakers and Spurs, Horry set a Finals record with seven steals in Game 1.

And of course there was center Hakeem Olajuwon, who routinely went from “great all-around center” to “impossible to game-plan around” in the postseason. His domination of newly minted MVP David Robinson (who won it over Olajuwon, much to his apparent dismay) in the conference finals that year is the stuff of legends.

While Olajuwon has eventually been replaced with Dwight Howard, and James Harden is now the one the offense runs through, the Rockets have the stuff to get past Golden State in the conference finals. Maybe someone just needs to remind Harden that MVP Stephen Curry has his hardware.