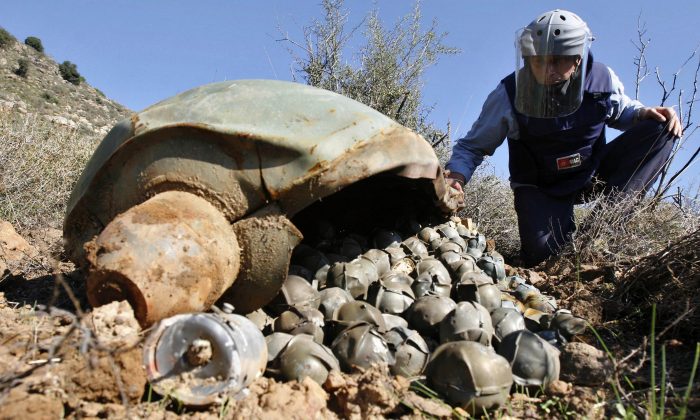 Cluster Bombs Should Stop Being Used

The continuous use of cluster bombs—many of them manufactured by the United States—in several conflicts around the world shows a disregard for human rights and tarnishes the image of those countries that make, sell, and use them. Because of the high number of civilians who are frequently their victims—including children who unknowingly pick them up—they should more appropriately be called “Cowards’ bombs.”

Cluster bombs eject explosive bomblets (little bombs) designed to kill personnel and destroy vehicles over a wide area. Unexploded bomblets can continue killing or maiming civilians long after a conflict has ended, and are very costly to find and remove. In Vietnam, for example, approximately 300 people are still killed annually by unexploded ordnance.

Handicap International says that 98% of their recorded cluster munitions casualties are civilians, and 27% are children.

The Implosions of International Relationships in the Mideast

As of October 2015, a total of 118 states have joined the Convention, as 98 parties and 20 signatories. Many of the world’s major military powers, including the United States, Russia, Brazil, and China, are not signatories of that treaty. The treaty’s obligations became legally binding after 30 states ratified the convention, and subsequently for all other ratifying states.

26 countries have subscribed to the Wellington Declaration, agreeing in principle that their stockpiles of cluster munitions should be destroyed. Despite these lofty declarations of intent, however, at least 17 countries have used cluster munitions in recent times. Among those countries are France, Iran, Iraq, Israel, Libya, Netherlands, Russia, Saudi Arabia, South Africa, Sudan, Syria, the United Kingdom, and the United States.

Even though all weapons are dangerous, cluster bombs are a particular threat to civilians because they affect a wide area and leave behind a significant number of unexploded bomblets, which can maim civilians—many of them children—for decades after the end of a conflict.

Because of the high number of civilians killed or maimed by these munitions their use has been condemned by many groups and organizations such as the United Nations, the Red Cross, Human Rights Watch, Amnesty International, the Cluster Munition Coalition, and Doctors Without Borders.

Handicap International, which since 2005 has collected hundreds of thousands of signatures to support its campaign to ban these weapons, says that 98 percent of their recorded cluster munitions casualties are civilians, and 27 percent among them are children.

Adding to questionable practices by international banks, Bank Track, an international network of NGOs specializing in control of financial institutions, many major banks and other financial corporations either financed directly or provided financial services to companies producing cluster munitions in the period of 2005–2012. Pax Christi, a Netherlands-based NGO, estimated that at least 137 financial institutions financed cluster munition production. Out of these 137 institutions, 63 were based in the United States and 18 in the European Union.

In the meantime, cluster munitions continue to be used, as was repeatedly denounced in Syria. Countries producing (and selling) them, should adhere to their own human rights principles.