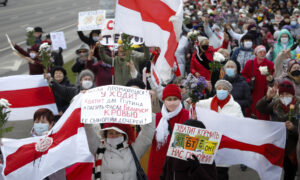 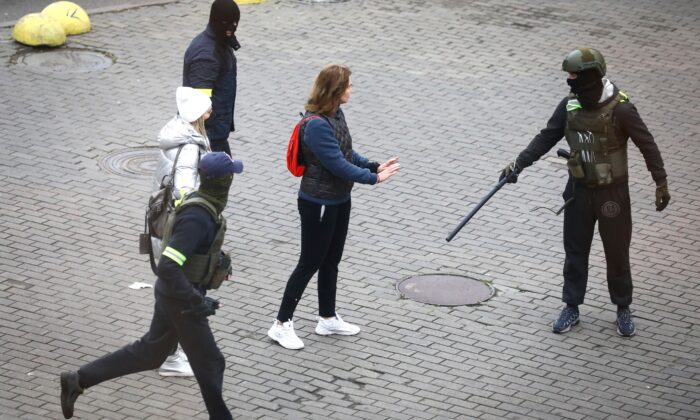 A woman argues with police during an opposition rally to protest the official presidential election results in Minsk, Belarus, on Nov. 8, 2020. (AP Photo)
Europe

KYIV, Ukraine—Club-swinging police went after demonstrators in Belarus’ capital who were demanding the resignation of the country’s authoritarian president on Sunday, the 90th consecutive day of protests.

Thousands of demonstrators tried to enter the center of Minsk from several directions, but police cordoned off the area with armored vehicles and phalanxes of riot officers and prevented the protesters from assembling in a single place.

The Belarusian Association of Journalists said at least nine journalists were detained. The human rights organization Viasna said at least 389 people were arrested in all, including well-known model Olga Khizhinkova, a former Miss Belarus.

The wave of protests, unprecedented in their size and duration, began after the Aug. 9 election that official results say gave President Alexander Lukashenko a sixth term in office. The opposition and some poll workers say the results were manipulated.

Lukashenko, who has suppressed opposition and independent news media since coming to power in 1994, has refused dialogue with opponents and has alleged that Western countries have incited the protests.

His main election challenger, Sviatlana Tsikhanouskaya, who fled to Lithuania under pressure from officials after the election, on Sunday exhorted protesters to continue demonstrating.

“We have stood against lawlessness and violence for 90 days already. In these 90 days, Belarusians made the regime understand that they have lost legitimacy and authority,” she said.