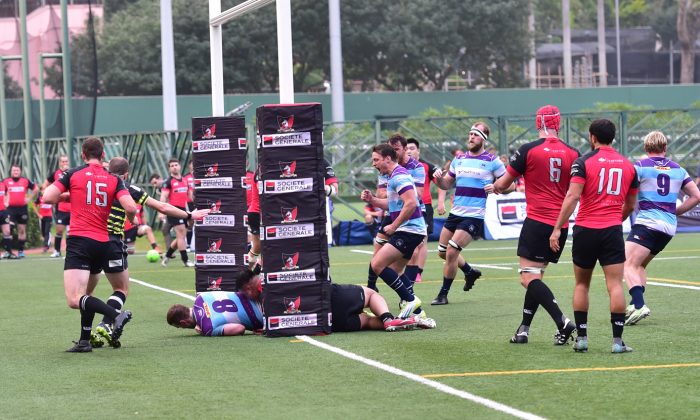 Natixis HKFC’s Trevor Conneely touches down with 5 minutes left on the clock in their HKRFU Premiership game against Societe Generale Valley, at Valley 8 on Saturday Dec 12, 2015 cutting the deficit to 13-7 but Club were unable to force the win leaving Valley unbeaten for the first half of the season. (Bill Cox)
HK Rugby Union

HONG KONG—Societe Generale Valley maintained their unbeaten start to the season with a fortunate victory over Natixis Hong Kong Football Club, at Happy Valley by 13-7. Valley always appeared in control of the match, but Club will rue missed chances, that would have upset the balance of the game. Their mathematical chance of winning in final minutes will weigh heavily on in their mind as to ‘what might have been’.

Valley opened the scoring with a penalty from the metronomic left boot of flyhalf Ben Rimene. Minutes later, on the counter attack, Valley collected the ball, Rimene chipped the ongoing Club defence, and after an aggressive run for the line by winger, Ryan Meacham, Valley lock Adam Campbell crossed for a try, converted by Rimene, to give Valley an encouraging start to the game, and lead, 10-0.

Club then began to assert themselves, marshaled by scrumhalf Jamie Hood, and looked the sharper side on the pitch. They dominated possession and territory for the next 29minutes, but could not turn dominance into points. They created chances to cross the Valley tryline, but did not make the pressure count. Valley did more than enough to frustrate Club, with resolute defence and playing at the fringe of the laws, which was reflected in the heavy penalty count against them, and the occasional evidence of frank exchanges between the players. This is afterall, the nearest Hong Kong has to a full-blooded derby match in rugby.

Just before halftime, Rimene stroked over another penalty, in only Valleys second foray into the Club 22, to secure a 13-0 halftime lead. On every visit to the HKFC 22, Valley came away with points.

The second half was more evenly contested. Both teams showed enterprise trying to play attacking rugby, but both teams defence was more than equal to the task of keeping their opponents at bay. After 50mins, Club had an opportunity, with a penalty to help build points momentum, but the kick was shanked wide. Despite, having a player sin-binned on 70minutes, Club finished the match strongly. A fine break, by Club fullback, Steven McCarron put number eight, Trevor Conneely in for a try under the posts, duly converted by flyhalf Jamie Lauder to make the score 13-7, with 5minutes to play. Club had a chance to steal victory from the jaws of defeat; a converted try would give them victory, and spoil Valleys end-of-year celebrations. It didn’t happen; Valley closed-out the match to win 13-7, to celebrate an early Christmas, and go into 2016 undefeated, and leave Club, licking their wounds for missing a chance to play Scrooge at Valleys expense.