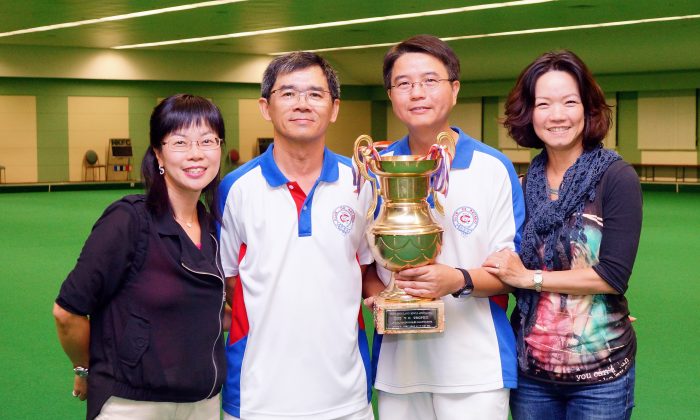 For the first ever time in the lawn bowls history of Hong Kong, players from one single club have dominated both Finals of the Men’s and Women’s National Indoor Singles.

Tammy Tham and Candy Ng from Club de Recreio played the Final of the Women’s National Indoor Singles two weeks ago, when Tham lifted the title at the end.

Last Friday Sept 27, it was their clubmates Fung Chi Leung and Chow Kin Hoi’s turn to test their skills at the Final of the Men’s National Indoor Singles.

Fung, who works at the IT department of Merrill Lynch, had just returned from a London business trip on Friday morning, making his performance all the more impressive.

In the Semi-finals in the evening, Fung beat Howard Poon from Indian Recreation Club to setup a clash with his clubmate Chow, who had defeated Danny Kwan from Golden Bauhinia Lawn Bowls Club.

The two players, who were playing their first Final for a major tournament, appeared a bit nervous in the first set and their bowls were never really getting close to the head.

When trailing 4:1 after four ends, Chow took the following four ends to win the first set 9:4.

Fung admitted that he was not too focused in the first set.

“Somehow I am not really concentrating at the beginning, but I just keep adjusting my forehand delivery. Gradually it picked up at the end and I am getting closer to the Jack,” explained Fung, who pulled the second set back and forced the game into tie-breaker.

In the three-end tie-breaker, Fung displayed his dominance by winning the first two sets a shot apiece.

But Fung reserved the best for the last end when he had three touchers. Chow was forced to play heavy shots to break the head, but failed.

The game finished in less than two hours and Fung was really happy about the result.

“Chow’s form had dropped a bit in the Final, so he did not present a strong challenge to me,” said Fung after the game.

“I think the key for my win is my patience and consistence.”

Chow, a retired civil servant, said that he felt really tired in the Final.

“The first set is still OK for me and I think I performed well to win it. But in the second set I really tired and could not focus on bowling,” said Chow, who pledged to work on his fitness to avoid the re-occurrence of this situation.

Results for CdeR have been encouraging this year. In addition to the two indoor singles titles, their bowlers also lifted the Women’s Novice Pairs and Women’s National Triples this season.

CdeR has been one of the major forces in the local lawn bowls arena, having won an impressive 18 titles in the Hong Kong Lawn Bowls Association Premier League’s top division over the years.

However, retirement and departure of experienced bowlers has seen CdeR drop outside of the elite row for a number of years. Despite a mini-revival last year, when the men’s and women’s team bounced back to Division Two and the Division One respectively, both teams are struggling this season.

Currently, the men’s team languish mid-table, just five points above the relegation zone. The women’s team, despite being reinforced by a number of new recruits including top indoor bowler Tammy Tham, have been in the drop zone for most of the season.

In the last four games remaining in this season, both teams needed to battle it out at the bottom of the table to avoid relegation.

Chi Chi will be remembered

While there is light at the end of the tunnel, CdeR suffered another blow last week when their icon and life-time member Chi Chi Fernandes passed away a week ago (on Sept 20) due to long term illness.

Fernandes won a lot of national championships and represented Hong Kong in a number of major international tournaments. He was a good friend of a lot of bowlers and the Hong Kong lawn bowls circle will surely remember him for a long time.

A minute of silence has been ordered for all league games this weekend in a mark of respect to Chi Chi.