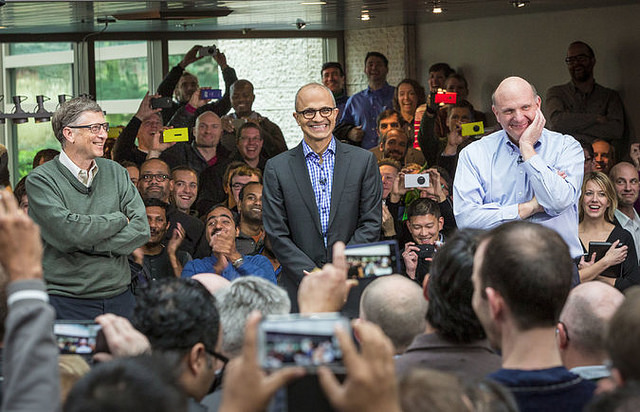 Cloudy future for Microsoft? The challenges of Satya Nadella

It is the year 2000. Bill Gates is the CEO of Microsoft, the biggest company in the world by market capitalization. Apple and Google, eyeing Microsoft’s success, are still struggling to make ends meet. They look for inspiration in the products rolled out by Microsoft, all the while trying to come up with the next big thing. This is a time when the iPod was just a promising project and Google’s search engine had less than 1% market share. Nokia is still the number one phone maker and is worth some $270 billion.

By 2014, the tables have turned. Microsoft is in a rut, dragging on more out of inertia than innovation. Its flagship product, Windows has failed to revolutionize in almost a decade. The iPad and the iPhone have changed the way we interact with technology and each other, and have left Microsoft gasping for air, by decreasing the feasibility of its business model. As for Nokia, the Finnish company is now worth less than Mark Zuckerberg, the founder of Facebook, and has had to merge with Microsoft to save itself from imminent default.

When Steve Ballmer, the now-ex CEO of Microsoft broke the news in August 2013 that he would be stepping down, some hoped that a new leadership would tame the company’s decline into irrelevance. But on the 4th of February, what they got was Satya Nadella, a Microsoft man and the head of its cloud and server division. Hopes are running high, but will he deliver? What can we expect from the Redmond giant, now that the third CEO in its history is at the helm?

The reactions among analysts were mixed, but mostly positive. They lauded Nadella’s performance as an executive, focusing on how he has gained the support of Microsoft’s rank-and-file by streamlining the management of the divisions he shepherded. They approved of the vision he sketched out for the software giant, focusing on improving the mobile and cloud technologies used. When asked how he hopes to achieve the goals he has in mind, he answered briskly: by “ruthlessly removing the obstacles that stop us from innovating”

Microsoft isn’t Nokia though. Despite lacking the glitz and glamour of its competitors, its functionality on desktop PCs is unrivaled, accounting for more than 90% of the market in operating systems. Its Office pack is still a bestseller, Nadella’s former cloud division is growing and Microsoft servers have become widespread and are expected to expand in the future. On top of everything else, the company sits on an $84 billion cash pile, enough for it to buy most Nasdaq-listed companies or invest in revolutionary technologies.

On February 4th, another story made its way from the ivory towers of Microsoft, which received much less attention than it warranted. Bill Gates announced that he would assume a more active role in the company he founded back in his Harvard days, as Satya’s tech advisor and product strategy go-to guy.

This unexpected involvement of Bill Gates in the day-to-day business of Microsoft can be either a cure or a curse.  Although known for his technical expertise, Gates has a less than impressive track record in areas such as smartphones, which are essential for Microsoft’s future success. Former executives say that he played a major role in the design of Windows Vista, one of the worst received products Microsoft ever released, as well as Windows 8, which was met with chilly reviews.

In a blog post, John Thompson, the Microsoft board member who oversaw the CEO search, claimed that the company identified a list of 100 potential candidates, including Ford Motors CEO, Allan Mulally. In the end, they chose the safer option and promoted an insider, Nadella. Perhaps with the ghosts of Gates and Ballmer looming over the CEO, many were reluctant to get involved?

Appointing Nadella was a cautious move, that contradicts the overall tone set by the industry, whose leaders are dreaming big and promising moonshots. In his first email sent to employees, Nadella used a quote from Oscar Wilde to wrap up his vision for the future: we need to believe in the impossible and remove the improbable. His task of bringing Microsoft back into the same ring with the bigwigs over at Apple and Google seems to be exactly that: impossible.