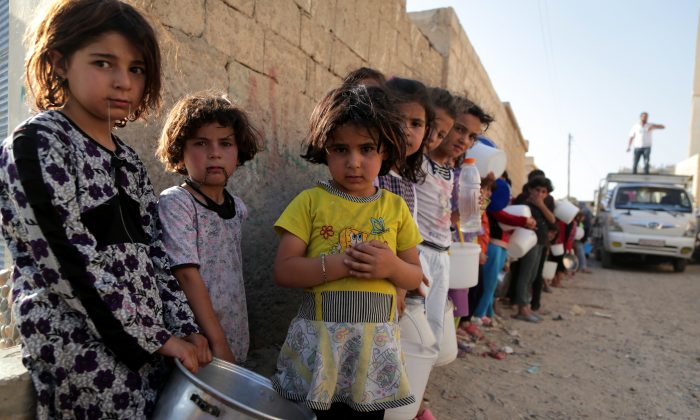 Syrian children wait in line to collect a free Iftar meal in the northern city of Raqqa during the Muslim holy month of Ramadan on July 14, 2013. (Mezar Matar/AFP/Getty Images)
Middle East

Clouds Over Charities for Refugees in Islamic Countries

The world has 50 million displaced people, and refugees have little choice but to depend on other countries and their citizens for generosity. Faith-based charities are often among the first to respond to humanitarian crises, notes the UN Refugee Agency, and Islamic faith-based charities are active in Pakistan, Iran, Lebanon, Jordan and Turkey – lead host nations for refugees. Fundraising by Muslim charities could be compromised as governments try to block financing mechanisms for extremist groups like the Islamic State, including jihadists posing as charitable groups. Governments, however, don’t agree on which groups should be banned. The UAE placed Britain’s largest Muslim charity, one that works closely with governments and the United Nations, on a list of banned groups. Aid groups engaging in discrimination, waste or criminal activity erode donor confidence. Unfounded accusations can ruin reputations and discourage generosity, too. – YaleGlobal

The murder and mayhem of Islamic State and other terrorists ruin the lives of those who must flee in more ways than one. The conflict poses danger and uncertainty for aid groups operating in the region, and fundraising is compromised as governments strive to put a stranglehold on resources diverted to extremists.

Amid a flurry of cross-border donations and grants to help the victims, governments want to prevent funding, particularly public monies or tax-exempt donations, landing into the hands of extremists. Attacks on Muslim charities as a whole are counterproductive and threaten fundraising capability among Muslims, identified as the most generous religious group in the United Kingdom, warned Stephen Bubb, executive director of ACEVO, a UK charity leaders network, in a letter to The Times and testimony to the Parliament’s Joint Committee on the Draft Protection of Charities Bill.

“Ironically, such groups are our best opportunity to create a common sense of belonging and purpose that prevents radicalisation and extremism,” Bubb wrote.

Governments are encouraging greater transparency on charitable missions and improved training for banks and transfer agents after more than 25 nations – including Saudi Arabia, the UAE, Kuwait, Oman, Qatar, Egypt, Iraq as well as the United States, China, India, the United Kingdom – met in Bahrain in early November for a Conference on Combating the Financing of Terrorism.

Suspicions have run high since the 9/11 attacks in 2001 about charities serving as fronts for collecting or laundering money for terrorist groups. A staff report for the US National Commission on Terrorist Attacks suggested that Al Qaeda funding, about $30 million per year, was largely diversions from Islamic charities and facilitators who collected money from “both witting and unwitting donors, primarily in the Gulf region.”

Yet faith-based charitable organizations are often among the first to respond to humanitarian crises, notes the UN Refugee Agency. At the start of 2014, the world had more than 50 million forcibly displaced people. Lead host nations for refugees are Pakistan, Iran, Lebanon, Jordan and Turkey where Islamic faith-based charities are on the frontlines. Faith-based groups have vast networks, notes the agency, and they “often remain long after international attention has faded, and funding has declined.” In October, the UN Relief and Works Agency – responsible for 5 million Palestinian refugees in Jordan, Lebanon and Syria, whose core activities largely rely on donations – praised a coalition of five international Muslim charities for relief efforts in Gaza and a $500,000 donation.

Since the conference in November, the United Arab Emirates banned more than 80 groups, including Al Qaeda and Islamic State, but also civic groups and charities like Islamic Relief UK, Islamic Relief Worldwide and the Muslim American Society – though the three are not banned in their home countries.The United States bans groups with similar Islamic Relief names in Indonesia, Philippines and Sudan.

So far, prosecutions of faith-based charities are relatively few. France shut down the Pearl of Hope charity in Paris and charged two leaders with using deliveries of aid to funnel funds to jihadist groups in Syria. The Charity Commission, the independent regulator in Britain and Wales, opened investigations against at least seven groups, reports the Telegraph.  Auditors refused to approve one account after donations increased exponentially and the groups could not produce adequate records on distributions in Syria. Other groups were linked to young men who left Britain allegedly to fight for the Islamic State.

The Charity Commission announced plans to invest £8 million in technology to profile, monitor charities to identify abuse, mismanagement or risks.

Donors also expect funds to go directly for blankets, food, healthcare, education and programs and many check sites like Charity Navigator to avoid high overhead costs. Mercy-USA for Aid and Development, not a faith-based group, with field offices and programs in Syria, Somalia and Gaza, reports low overhead costs, less than 5 percent. Costs of working in conflict zones are built into budgets, and the group is accustomed to working in dangerous areas, for example, providing food and other care for 1,000 families in Aleppo for two years along with winterization packages that include blankets.

“We rely on field staff to make the call on security,” said Kari Ansari, spokeswoman, who said the group has no problems with government tracking. “If an area is not safe, we pull out, for the safety of recipients and staff.” Many local field staff cannot afford to flee to another country and insist on carrying out relief efforts. Mercy-USA lost one aid worker in a bombing last year.

International nongovernmental or civil society organizations have increased tenfold since 1990 with more than 66,000 in 2012 with growing influence. For example, involvement in projects financed by theWorld Bank increased from 21 percent in 1990 to 82 percent in fiscal year 2012. Of more than 3,000 NGOs with consultative status with the Economic and Social Council of the United Nations, 320 are characterized as religious, suggests a study in the Journal of Humanitarian Assistance: More than half are identified as Christian,16 percent as Muslim.

Charitable giving is obligatory for Muslims with zakat one of the five basic pillars of Islam. Followers are expected to donate about 2.5 percent of their total wealth – not just wages – held for at least one lunar year to assist the poor, debtors, travelers and other causes. Some Islamic charities offer online calculators to guide donors on valuing savings and property.

Governments and charities alike repeatedly urge donors to review projects and charity track records before giving. The US Treasury Department  suggests that charities monitor employees, grantees with audits and sometimes even background checks .

Aid groups engaging in proselytization, discrimination, waste or criminal activity erode donor confidence. Slightest hints of wrongdoing or unfounded accusations damage reputations of aid groups and the organizations that rely on them, including the United Nations.

Refugees depend on generosity. The World Food Programme put out an emergency appeal for funding in early December, warning that food aid for 1.7 million Syrian refugees living in Jordan, Lebanon, Turkey, Iraq and Egypt would be slashed. More than $80 million was raised in one week.

The UN anticipates 27 percent more funding is needed for humanitarian aid in its 2015 budget over 2014, with the bulk of that to be spent in Syria, Iraq, South Sudan and Sudan. Reduced aid could transform humanitarian emergencies into security crises.

Susan Froetschel, with YaleGlobal Online since 2005, is the author of five novels. Fear of Beauty won the youth literature award from the Middle East Outreach Council. Allure of Deceit is about an Afghan village’s dismay over being considered a recipient for charitable aid.

Republished with permission from YaleGlobal Online. Read the Original.