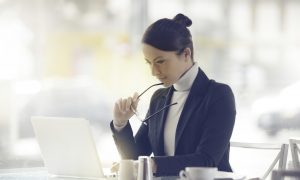 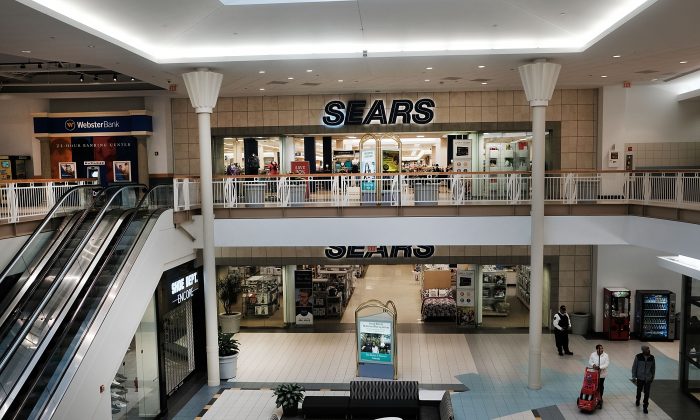 WATERBURY, CT - MARCH 28: People walk through a nearly empty shopping mall on March 28, 2017 in Waterbury, Connecticut. As consumers buying habits change and more people prefer to spend money on technology and experiences like vacations over apparel, shopping malls across the country are suffering.In the last decade dozens of malls have closed as retailers like JCPenney, Macy's and Sears, known as 'anchor stores,' close hundreds of locations do to falling sales. Real estate firm CoStar are projecting that nearly 25% of American malls are in danger of losing their anchors stores. (Photo by Spencer Platt/Getty Images)
Business & Economy

A confluence of factors is driving this trend. For years, the financial health of large department stores has been deteriorating largely due to the growing popularity of online shopping.

While weak department store sales are nothing new, there’s increasing concern about economic contagion affecting malls in general. Wall Street traders have placed bets on the failures of mall owners and operators and widespread defaults on commercial real estate debt.

Is the mall, an American icon, truly doomed? Or, to quote another American icon, are reports of its demise greatly exaggerated? The truth is a bit more nuanced.

The typical suburban mall begins life with a plot of land bought by a commercial real estate developer or real estate investment trust (REIT). While the mall is under construction, the developer must acquire tenants such as department stores and other retailers, who sign long-term leases.

A typical shopping mall features one or more anchor stores and dozens of smaller retailers. Anchors are usually famous department stores such as Nordstrom, Sears, or Macy’s that serve as the headline tenants that attract consumer traffic to the mall.

The importance of anchor stores cannot be overstated. They not only pull in the most customers, but their presence also affects the fortunes of all other stores within the mall and serves as a major draw for other retail tenants to lease adjacent spaces.

The impact on Sears has been severe. In a March filing with the U.S. Securities and Exchange Commission, Sears raised “substantial doubt” regarding its “ability to continue as a going concern.” In other words, the company publicly expressed doubt about its future as a viable company. Sears has aggressively closed retail locations—both of its subsidiary Kmart and its namesake stores—and sold off valuable assets, such as the Craftsman hardware brand.

Some experts think of the recent closures as a “right-sizing” of America’s department store footprint.

The United States devotes more space to department store retail than any other country in the world. “In the U.S., 46 percent of gross leasable area throughout shopping centers is devoted to department stores. Compare that to only 27 percent in the U.K.,” according to JLL’s 2017 Retail Research Point of View report.

“It appears that the U.S. has more than it needs.”

Besides department stores and retailers, mall owners and operators are also beginning to feel the pinch. Investors are betting that nationwide department store closures will soon hit the bottom lines of mall operators stuck with high vacancies.

Simon Property Group Inc., the nation’s biggest REIT and mall operator, has seen its shares decline 5 percent since Jan. 1 and 16 percent over the past year. The company also has the largest amount of shares lent to short sellers since 2011, according to the Financial Times. That’s an indication that investors are making a strong bet against the company’s stock.

With bad news piling up for malls, a growing trend among hedge funds and other traders is to bet against commercial real estate debt, or loans taken out by mall owners and operators.

Betting against real estate debt by shorting commercial mortgage-backed securities (CMBS) or an index of these securities is a direct way to profit from failing mall operators without exposure to the volatility of stock markets. An alternative to shorting CMBS is purchasing credit default swaps—or insurance-like contracts—on the bonds.

Such bonds are vulnerable because the interest payments are often directly supported by rent from mall tenants. Widespread retail closures could hinder debt service and lead to defaults.

A growing trend amongst hedge funds and other traders is to bet against commercial real estate debt.

A Wall Street Journal report confirms that hedge funds, such as Alder Hill Management, have increased wagers against these bonds, in a manner similar to the bearish bets some traders made against the subprime mortgage market before the 2008 financial crisis, as portrayed in the book and film “The Big Short.”

Not All Doom and Gloom

While it’s easy to pin the blame for the decline of malls and department stores on online retailers such as Amazon—which last week announced a 23 percent revenue increase in the first quarter—the true situation is a bit more complex.

Wells Fargo Securities studied 72 defunct malls, most built before the mid-1970s, and found they “were overtaken by larger malls built from the late 1970s to the early 1990s that better capitalized on demographic and transportation shifts,” according to a Wall Street Journal report.

Wells Fargo’s study is an argument against the prevailing narrative that the demise of the shopping mall is singularly caused by online retailers. The study found that many more mall failures were the result of demographic and social-economic changes, such as the population shift away from the Rust Belt during the last two decades.

In addition to mall operators relocating to better locations, stores are also actively transforming their retail business model. Simon Property Group’s first quarter earnings call alluded to the belief that many retailers had over-invested in online shopping and some are beginning to pivot back into retail by improving in-store experiences.

“There is a number of pure internet retailers that will not be able to really sustain their business model, in my humble opinion, unless they have a physical presence,” said David E. Simon, CEO of Simon Property, on the company’s first quarter earnings calls with Wall Street analysts.

Even Amazon, the biggest online retailer, is considering a push into physical retail. Amazon has experimented with a small number of bookstores and gadget shops, and more recently dabbled in physical grocery stores.

Pivoting away from anchor department stores could sometimes improve profits.

Betting on commercial real estate loan defaults also isn’t so straightforward. It may be too simplistic to assume mall owners and operators will stand pat while department stores close.

Wells Fargo found that almost 60 percent of the defunct malls were redeveloped into other types of properties such as open-air shopping centers, civic centers, or other residential or industrial complexes.

For mall operators, pivoting away from department stores might, in some cases, improve profits.

“The rents paid by department store anchors have historically been low. In many cases, the opportunity to re-tenant space translates into higher rental income for the owner,” according to the JLL report.

At the upmarket shopping center The Galleria in Houston, restaurants Fig & Olive and Nobu will soon occupy the former location of a Saks Fifth Avenue store. At The Shops at Riverside in Hackensack, New Jersey, an AMC Theatres cinema will take over the space formerly occupied by a Saks Fifth Avenue department store. And Round1 Bowling and Amusement recently leased 56,000 square feet of a former Macy’s location at the Northwoods Mall in Peoria, Illinois.

Like those of many other industries impacted by the digital revolution, the future of American malls may well depend on how quickly they can adapt and change.