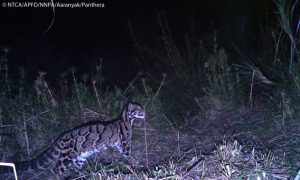 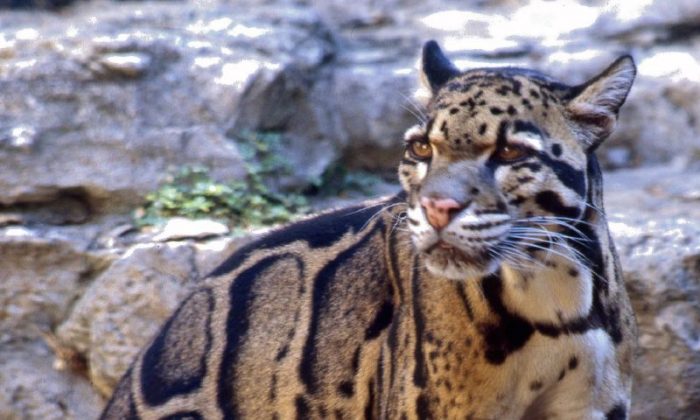 The clouded leopard is hardly seen and even more difficult is a photographic evidence of its existence. That is why it was a rare delight when camera traps placed in West Bengal’s Buxa Tiger Reserve were able to capture the image of a clouded leopard recently. This is the first photo of the elusive cat from the reserve in a decade.

Clouded leopards are one of the smallest of the big cats. Its most stunning feat is its ability to climb trees as effortlessly as the monkeys. It has also been observed hanging from branches from its rear feet upside down!

However, the species is very shy with its clouded coat helping it immensely in remaining hidden in the forest growth. It has been so difficult for forest officers and naturalists too to spot the leopard that most of what we know of this rare cat is through observing the captive ones in zoos.

Buxa tiger reserve in West Bengal was always known to be a habitat of this animal, but there have been very rare occasions when it was seen by humans. State wildlife advisory board member Biswajit Roy Chowdhury said he photographed a clouded leopard in Buxa’s Panbari way back in 1996. Former deputy field director of Buxa, Subhankar Sengupta, said that in 2005 two clouded leopards were spotted in the forests of Kumargram and Hatipota and both were filmed.

“After that, there were sporadic sightings but never photographed,” he added.

The recent photograph is a hazy one taken by one of the camera traps placed by the forest officials, but it is proof enough of the cat’s existence.

Buxa field director Sandeep Sundriyal said the clouded leopard was clicked by a camera trap on the upper reaches of the tiger reserve.

“The exercise is part of our monitoring protocol. We had set up 80 camera traps in different parts of Buxa with each pair covering 4 sqkm. The sites are changed every one and a half months,” he said.

Clouded leopards are active at night time and remain hidden among dense foliage during the day on top of tree branches.

“Places like Newlands and Sankosh in Buxa are very good habitat for this animal. We are lucky that it could be captured in a camera trap as they are great climbers and mostly found atop tree branches,” he added.

“In 1992, when I was field director, a clouded leopard was rescued from a house in Alipurduar. It was taken to an enclosure in the forests of Bhutanghat and later released in the core area. But its photographic evidence is indeed rare,” he said.

More About the Clouded Leopard

This article was originally written and published by Atula Gupta, the head administrator for indiasendangered.com. For the original article and more information, please click HERE.