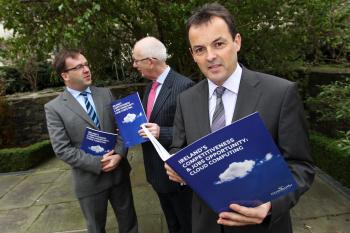 Cloud Computing to create 9.5 Billion euro in Irish sales annually. From left John Finnegan, Goodbody Consultants; Barry O'Leary, CEO of the IDA; and Paul Rellis, Managing Director, Microsoft Ireland at the launch of a report commissioned by Microsoft and carried out by Goodbody Economic Consultants. (Maxwells)
US

By Martin Murphy
Print
DUBLIN—If Ireland moves swiftly and the country can establish itself as a global centre for cloud computing, 8,600 jobs could potentially be created, claimed a report compiled this week by Goodbody Economic Consultants.

The report, entitled “Ireland’s Competitiveness and Jobs Opportunity: Cloud Computing”, was commissioned by Microsoft Ireland. It said that Ireland had the potential to restore its competitiveness, create jobs and gain a "disproportionately large share" of the global cloud computing market, which the report estimated to be worth €40 billion by 2014.

The Epoch Times contacted Fine Gael and The Labour Party, and while both welcomed the announcement, neither party wished to comment further.
A spokesperson for the Department of Enterprise, Trade and Innovation said, "It is expected that cloud computing will have a significant future economic and employment impact." He also noted that the IDA had identified cloud computing as a key technology trend.

Mr Rellis believes that cloud computing will revolutionise technology in the same way that the internet did. “As this global industry is in its infancy, Ireland has a real opportunity to pioneer its adoption to create new jobs, new businesses, and enhance our competitiveness while attracting FDI (Foreign Direct Investment) and creating new export markets,” said Mr Rellis.

He said that if the “correct steps” are taken now, then Ireland could potentially be the home of the next FaceBook or Salesforce.com. “However, the race is on globally, and if we do not act immediately, the opportunity will be lost,” explained Mr Rellis.

According to the report, cloud computing is a “major evolving industry” that may have the potential to create 8,600 jobs and 9.5 billion euro in annual sales each year by 2014. It is also believed that cloud computing can reduce the cost of doing business, as services are “migrating to the cloud.” The report estimates the spin-off establishment of an additional 2,000 new non-IT small and medium businesses, employing some 11,000 people.

Barry O’Leary, CEO of the IDA said, “Microsoft and Goodbody Economic Consultants are to be congratulated on this piece of research and I warmly welcome the publication of this report. As an organisation that bridges both private and public sector, we agree that cloud computing will have significant future economic impact.”