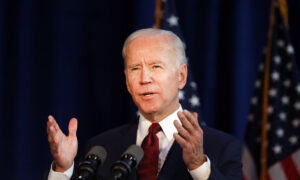 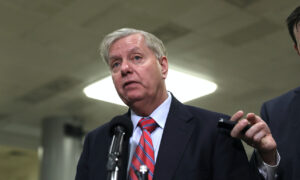 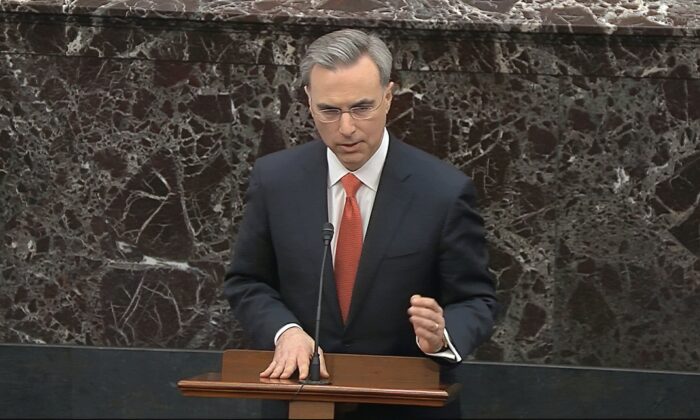 White House counsel Pat Cipollone speaks during closing arguments in the impeachment trial against President Donald Trump in the Senate at the U.S. Capitol in Washington, on Feb. 3, 2020. (Senate Television via AP)
Impeachment Trial

WASHINGTON—With acquittal all but assured, the Democrats prosecuting President Donald Trump in his impeachment trial unleashed another round of arguments on Feb. 3, while the president’s lawyers called the case against him politically motivated, reckless, and baseless.

“We have proven Donald Trump guilty. Now do impartial justice and convict him,” House impeachment manager Rep. Adam Schiff (D-Calif.) told the 100-member Republican-controlled Senate, which is due to vote on Feb. 5 on whether to remove Trump from office.

Trump has called the impeachment effort an attempted coup by Democrats.

The Democratic-controlled House impeached Trump on Dec. 18, 2019, on charges of abuse of power for allegedly withholding military aid while asking Ukraine to investigate 2020 Democratic presidential candidate Joe Biden and obstruction of Congress for blocking testimony and documents sought by lawmakers in their investigation. No House Republican voted in favor of the articles.

“This was the first totally partisan presidential impeachment in our nation’s history. And it should be our last,” Trump personal lawyer Jay Sekulow told the Senate as part of the defense’s closing argument. “What the House Democrats have done to this nation, to the Constitution, to the office of the president, to the president himself, and to this body (the Senate) is outrageous. They have cheapened the awesome power of impeachment.”

Schiff told the senators during closing arguments that the nation’s founders wrote impeachment into the U.S. Constitution to give Congress the power to remove a president for committing “high crimes and misdemeanors” as a remedy to constrain evil.

Sekulow called the impeachment drive reckless, said neither of the charges brought against Trump represent an impeachable offense, and accused Democrats of seeking to negate the 2016 election won by Trump and to subvert the will of the American people.

“The answer is elections, not impeachment,” Sekulow said.

“We can, together, end the era of impeachment.”

The Senate seems certain to acquit Trump. A two-thirds majority is required to remove the president. None of the 53 Senate Republicans has indicated support for conviction.

Schiff alleged that Trump, if left in office, would “continue to seek foreign interference” in the Nov. 3 election, in which he is asking voters to give him four more years as president.

“A president free of accountability is a danger to the beating heart of our democracy,” Schiff said.

The Senate voted on Jan. 31 not to hear any witnesses, such as Trump’s former national security adviser John Bolton, who, in a yet-unpublished book manuscript allegedly depicts Trump as playing a central role in pressuring Ukraine. Only two Republicans, Mitt Romney and Susan Collins, voted to hear witnesses.

After closing arguments are complete, senators will be able to make speeches on the matter until Feb. 5, when a final vote is scheduled for 4 p.m. local time, to determine whether to convict or acquit the president. Some Republican senators have called Trump’s actions wrong or inappropriate but not impeachable.

During the trial, Trump’s lawyers offered an expansive view of presidential powers and argued that he couldn’t be thrown out of office for abuse of power.

House Speaker Nancy Pelosi (D-Calif.) triggered the impeachment process based on a complaint from an anonymous whistleblower who alleged that during a call with Ukrainian President Volodymyr Zelensky, Trump pressured the Ukrainian leader to open an investigation into the dealings of former Vice President Joe Biden and his son Hunter.

The transcript of the Trump–Zelensky call released by the White House shows Trump inquiring about the firing of Ukraine’s top prosecutor, Viktor Shokin. At the time of his firing in 2016, Shokin was investigating Burisma, a Ukrainian gas firm that paid Hunter Biden to serve on its board of directors. Biden has on multiple occasions publicly bragged about forcing Shokin’s ouster by withholding U.S. loan guarantees to Ukraine.

Trump is only the third U.S. president to be impeached. No president has yet been removed from office as a direct result of impeachment.

The first contest in the state-by-state battle to determine the Democratic candidate who will challenge Trump took place Feb. 3 in Iowa, a stern test for Biden as he seeks his party’s nomination. Three senators who will vote in the trial on Feb. 5 are seeking the Democratic nomination: Bernie Sanders (I-Vt.), Elizabeth Warren (D-Mass.), and Amy Klobuchar (D-Minn.).

Trump was scheduled to deliver his annual State of the Union speech to Congress on Feb. 4.