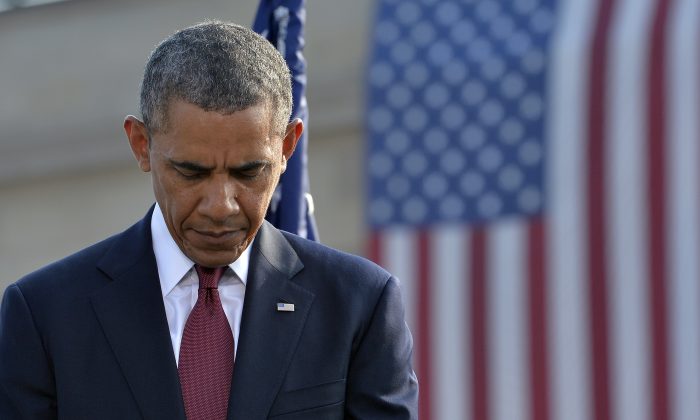 U.S. President Barack Obama bows his head during a ceremony at the Pentagon Memorial to mark the 12th anniversary of the 9/11 attacks in Washington, DC, on September 11, 2013. (Jewel Samad/AFP/Getty Images)
Opinion

With the world focused on ISIS and Iraq, last month US Special Forces carried out a capture operation in Libya against Ahmed Abu Khattala, the suspected ringleader of the 2012 attacks in Benghazi. The US ambassador to the United Nations, Samantha Power justified the raid as an action based on America’s “inherent right to self-defence” which was aimed at preventing armed attacks.

Power’s letter relies on a confusing mix of justifications, invoking both a state of “armed conflict” and the need to prevent future attacks. Significantly, the letter suggests that the Obama administration has maintained the notion of “continuing and imminent threat” that has driven the US counter-terrorism effort since Obama’s first term.

This deceptively simple notion implies that, given that the threat is always “imminent” it is up to the decision-maker to decide when and if it is “imminent” enough. So the notion of imminence is transformed from something that has a meaning in terms of timing – when imminent means “immediate” – to something that depends on a decision-maker’s assessment and priorities, that is, a policy option.

This transformation did not occur in a vacuum. Back in 2002, in the now-famous National Security Strategy, the Bush administration explicitly called for a redefinition of the temporal parameters of imminence. The shadowy nature of the threat posed by terrorists (and rogue states) required states to act pre-emptively. The strategy has correctly been interpreted as one of the key steps in preparing the ground for the 2003 war against Iraq.

More problematically, the Bush White House did not provide any clear framework as to how imminence should have been reinterpreted. The text of the strategy often confused “pre-emption” with “prevention”, and the “brush rhetoric” of the Bush years did not help in setting clear standards.

After his exit from the Bush administration, John Yoo – a former senior staffer in the attorney-general’s office – developed the administration’s approach, pushing the message that the US should have started approaching imminence as a more permissive “decisional standard” (which allows the decision maker to make the judgement). In this standard, three criteria played a key role: the probability of an attack, the window of opportunity available to the decision-maker, and the magnitude of the possible harm if nothing were done.

As a general approach, Yoo drew parallels with the problem of women who suffered domestic violence in the US: “Rather than temporal imminence, the battered woman’s defence seeks to use past conduct – particularly escalating violence – to assess the probability that future harm is likely to occur.”

The Obama Administration came to office with the aim of reversing many of the Bush administration’s positions (and indeed overturned some of Yoo’s positions on the use of force in interrogation). But on the concept of imminence, Obama’s White House has demonstrated an understanding similar (if not broader) than that of his predecessor.

In 2011, John Brennan, at the time White House counter-terrorism adviser, suggested that both the United States and its allies were moving towards a more flexible notion of “imminence”. In a throwback to the Bush doctrine, Brennan suggested that the reason for this shift was the shadowy and continuing nature of the terrorist threat and its capabilities.

The following year, the attorney-general, Eric Holder, confirmed that imminence incorporated issues such as windows of opportunity, possible future harm and possible future disasters. Within the Obama administration, as Daniel Klaidman has reported, the state department’s chief legal adviser Harold Koh has argued that terrorism poses a “continuing and imminent” threat that requires an “elongated” notion of imminence, similar to the one adopted in domestic cases involving “battered wives”. The parallel with Yoo’s approach could not be clearer.

In January 2013, a leaked Department of Justice White Paper confirmed that the administration had moved from “flexibility” to an extremely “decisional” interpretation of imminence.

The paper makes several points, but three are key here. First, targeting an operational leader is lawful when “an informed, high-level official of the US government has determined that the targeted individual poses an imminent threat”. It would be difficult to find a clearer statement that imminence now depends on an official’s determination. Second, this determination includes: the existence of a “window of opportunity” the possibility of reducing collateral damage and the chance to head off future disaster. Third, in a Rumsfeldian turn, the paper states that the US government is allowed to strike when it has the opportunity, since it “may not be aware of all al-Qaida’s plots as they are developing and thus cannot be confident that none is about to occur”. Or, if you prefer to paraphrase: “the absence of evidence is not evidence of absence”.

To be sure, the administration has relied on other legal manoeuvres including a broad interpretation of the 2001 Authorisation for Use of Military Force (AUMF) to conduct its kill-or-capture operations. Still, as the secret memo released on May 24 makes clear, the expansion beyond recognition of the notion of imminence has permitted some of the more controversial operations, including the killing of US-born cleric Anwar al-Awlaki. The killing of al-Awlaki, in particular, makes clear how imminence no longer means immediate. Eighteen months passed between the July 2010 determination that al-Awlaki posed an imminent threat – and hence could be targeted – and the actual killing in September 2011.

In mid-2013, Barack Obama called for a winding down of the remnants of the “Forever War”. But even while making these calls, the US maintains that terrorism poses a “continuing and imminent threat” – depriving the notion of imminence of any meaning. With the drums of war beating again around Iraq, and with continuous special forces operations, the Forever War seems destined to live up to its name.

Luca Trenta is a teaching associate at the School of Politics and International Relations of the University of Nottingham. Trenta does not work for, consult to, own shares in or receive funding from any company or organisation that would benefit from this article, and has no relevant affiliations. This article was originally published on The Conversation. Read the original article.