SYDNEY, AUSTRALIA—It is nothing more than “commercialised trafficking of human remains,” Emmy Pfister, coordinator of a citizens group called Australians Against Bodies Exhibit, said at a press conference on Sept. 16.

The citizens group is calling for an investigation into the identities of the real human bodies that have been on display as part of the ‘Real Bodies: The Exhibition’ at the Entertainment Quarter in Sydney.

The exhibit, presented by Imagine Exhibitions, boasts on its website to be “an educational experience with multi-layered narratives,” featuring 20 cadavers and over 200 organs sourced from Dalian, China. The humans have been plastinated, a process which uses liquid silicone rubber to prevent decay.

Dr. Huang Wanqing, a Chinese-American from New York City, was also at the press conference, to plead with Australian authorities to investigate the origins of those bodies—as he believes some remains may be of his missing brother from China, Huang Xiong.

15 years ago, Huang Xiong disappeared in Shanghai. Huang is a practitioner of Falun Gong, a spiritual practice severely persecuted in China. From 2000 until their last contact on April 19, 2003, Huang Xiong had been imprisoned at a labor camp or on the run from Chinese authorities.

Former Chinese Communist Party (CCP) leader Jiang Zemin launched a campaign to eradicate Falun Gong on July 20, 1999, seeing the peaceful meditation as a threat to the ideas of “marxism, materialism and atheism” that gave birth to the CCP. Since then, thousands of Falun Gong practitioners are reported to have died from persecution and torture, with many more cases going undocumented.

Since his brother went missing, Huang Wanqing has never given up his search.

He fears that his brother, who was using an alias while on the run, may have been targeted for organ abuse or use as a body in the multi-million dollar plastination business, Huang said, referring to the admitted practice of forced organ harvesting from live bodies by the Chinese state.

But Australia’s specialist medical training organisation, the Royal Australasian College of Physicians (RACP), alongside the Australian Lawyers for Human Rights (ALHR), the NSW Bar Association, academics and civil organisations voiced their concerns in an open letter (pdf) to both federal and state authorities that the exhibit fails to meet local ethical standards.

According to Real bodies, the specimens on display are all “unclaimed” bodies that were “donated legally” before being plastinated by the China-based company Dalian Hoffen Bio-Technique Co. Ltd.

Given Communist China’s abysmal human rights record and the lack of transparency surrounding its security and judicial systems, experts are skeptical to take any official documents from China at face value.

In a recent interview with News.Com.Au, David Kilgour, former prosecutor and Canadian secretary of state for Asia-Pacific, and investigator into organ harvesting in China, said that none of the claims about the exhibition are correct. “Not a word is believable based on our research,” he said.

Experts worry whether the bodies “legally donated” under Communist China’s laws meet the ethical expectations and values acceptable in Australia.

“The organisers are displaying bodies and organs that haven’t been documented and they don’t have written consent to use this anatomy, after the person has died,” Professor Ian Kerridge, Chair of the RACP Ethics Committee, said.

“As medical specialists we support public education about health, illness, and the body but satisfying basic ethical norms and respect for a deceased person must be paramount.

“Until organisers can prove these bodies and organs have been ethically sourced and have adequate donor consent, we think the exhibition should be shut down.”

Matas explained that body exhibits sourced from China have been banned by local jurisdictions in France, Israel, Hawaii and Seattle. The Czech Republic also passed legislation to ensure that such exhibits were not legal without donor consent.

“In Australia, either these exhibits are legal or illegal. If they’re illegal, obviously the law should be enforced. If they are legal, there’s a gap in the law,” he said at the press conference.

“But they don’t do that and that’s a problem.”

He said that Australia is now in a position to close loopholes in its legislation to cover bodies sourced from outside Australian borders and to require donor consent before death for purposes of display. Matas added that sourcing bodies from prisoners should be completely banned “because consent from prisoners is not a meaningful consent.”

Since April 14 when Real Bodies opened its doors in Sydney, crowds of people have rallied outside, urging local Australian authorities to review the permission the exhibition was granted to do business here.

Federal departments responded by saying that Imagine Exhibitions had met all legal requirements for customs and biosecurity, which do not currently require any identification or consent documents for the deceased.

Legal and medical professionals also expressed concerns about breaches to NSW anatomy licensing laws (PDF), which a NSW Health spokesperson told The Epoch Times is required for “anatomical examination.” While the spokesperson said the department acknowledges the serious nature of the concerns, it said that ‘Real Bodies’ did not require an anatomy license as it was not conducting “anatomical examination” for medical or scientific purposes.

The Epoch Times has enquired further with the department as to whether the scientific and educational nature of the exhibit means that the exhibit is in fact considered to be an “anatomical examination.”

Amanda, who works in the medical field, told ABC Radio that after visiting the exhibition with her kids, she left with “a very bad taste” in her mouth.

“I wasn’t not impressed, I wasn’t happy that I took my kids.

“I’d previously been to the NSW university anatomy museum and that was amazing and fascinating and very professional, and clearly consentual on every count.

“I didn’t feel good about this exhibition and I wish I hadn’t have gone.”

Australians Against Bodies Exhibit (AABE) also urged that DNA testing to be conducted on the bodies to attempt to identify who the remains belong to.

A neurologist in the UK, Dr. David Nicholl, also recently called for DNA testing to be conducted at another of Imagine’s body exhibitions showing in Birmingham.

China expert and investigative journalist Ethan Gutmann believes DNA sampling could “explode open” the issue of organ harvesting from prisoners of conscience—a subject that Gutmann has campaigned on for over a decade.

“China is right now pursuing a policy of trying to test the DNA of living Chinese people,” Gutmann said. “They’ve already tested 17 million Uyghur Muslims and they can narrow it down to within third-degree relatives, so it’s becoming possible to get a match.”

President of Australian Uyghur Association, Mamtimin Ala, said that the Uyghur community was also supporting calls to determine the identity of the bodies, saying, “I am equally worried about the fate of more than a million Uyghurs … who are being incarcerated in notorious Nazi-style concentration camps in East Turkestan, aka Xinjiang, without any proper legal processes.”

“What if we will see more and more bodies of the Uyghurs being plastinated and being exhibited without their consent in Australia as well as in other countries in the future?”

Ala said that his community had already received information confirming fears of state-sanctioned organ harvesting in China. He said that Uyghur detainees killed in camps and prisons had been returned to their families with scars on their body, indicating that their organs had been removed against their will.

“What if the Uyghurs are the current or next victims of organ harvesting, which is thriving as a lucrative business on a massive scale in China?” he said at the press conference.

Huang Wanqing also requested that DNA testing be done on the exhibited corpses, so he could confirm whether his brother is indeed in the exhibit.

“There are many overseas Chinese people with missing relatives in mainland China like me,” Huang said. “[DNA testing will] allow us to give him the peace he deserves through a proper burial of his body,” Huang said. 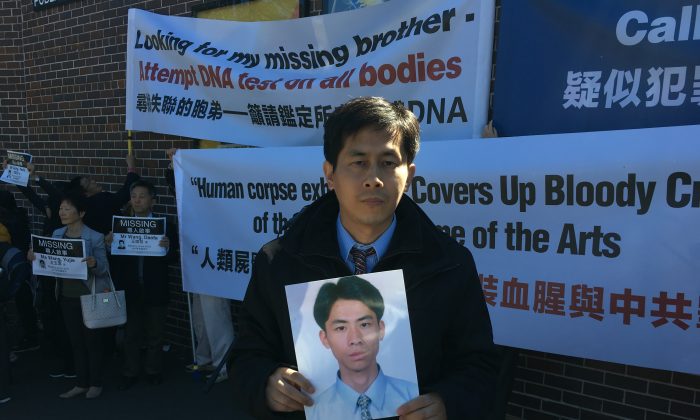