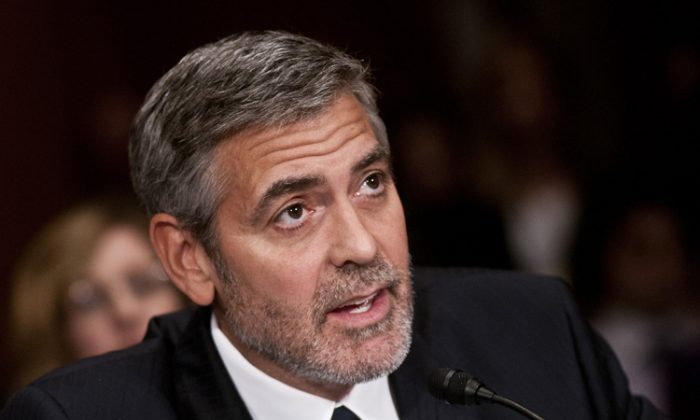 Clooney Appeals to Washington for Action on South Sudan

Actor and activist George Clooney appealed to the U.S. Congress to prevent a humanitarian crisis from occurring in South Sudan, calling on the administration to send a special envoy to China to put pressure on Khartoum, and set up a specific team to track down illegal offshore bank accounts belonging to the north’s leaders.

South Sudan became the world’s newest country last year, after two decades of bloodshed. But the secession from northern Sudan has not resolved the fighting, with violence continuing along the border regions where oil—located in South Sudan—is contested by Khartoum, which owns the refineries and pipelines.

Three Sudanese leaders, including President Omar Bashir, have been indicted for war crimes in Darfur by the International Criminal Court (ICC). George Clooney fears history will be repeated on the border regions of South Sudan unless something is done now.

Speaking before the Senate Foreign Relations Committee in Washington on March 14, Clooney, who has just returned from the region, described the scene in South Sudan as a campaign of “ethnic cleansing” and a “real disaster.”

Both Christian and Muslim ethnic communities were affected, and bombings from Russian Antonov planes and rocket fire endured daily, forcing the tribal people to leave crops and scramble into caves, he said.

“It is a campaign of murder and fear and displacement and starvation,” he told the Committee, chaired by Sen. John Kerry (D-Mass.).

The Academy award-winning actor acknowledged that America had its own economic woes but noted that the South Sudanese have now halted oil shipments, affecting China, which relies on Sudan for 6 percent of its oil. With China forced to buy oil elsewhere, gas prices have escalated events in Sudan, which is impacting the U.S. economically, he said.

The United States now needs to do “what we are best at—real diplomacy,” he said, adding that approaching China directly to pressure Khartoum to stop the border fighting would be a first step.

Clooney said he personally tried “guilting” China on Darfur before the Beijing Olympics, but failed, noting that China used its position on the U.N. Security Council to block initiatives that would pressure Khartoum. But China had a $20 billion investment in oil in Sudan that is presently useless, and this could be used as leverage, he said.

He suggested the administration send a high-level envoy to Beijing to make an economic case. “It seems to me we can use this window of opportunity before it gets too late.”

Clooney also suggested the United States set up a specific team to track down money and assets Khartoum’s leaders siphoned off from oil dollars, which they use to buy weapons and to shore up their positions.

“Let’s use the techniques we have learned in chasing terrorists and find and freeze the offshore bank account of these war criminals,” Clooney said, adding that even if it was not possible to freeze these funds, exposing their corrupt dealings would have its own momentum as witnessed in the Arab Spring.

“When you find out how much money they have taken from their own people and hidden in banks, that tends to create insurgents inside,” he said.

He also called for tougher sanctions, saying, “Let’s make Khartoum a very lonely place.” He noted one lobbyist in Washington who gets paid $20,000 a month to lobby on behalf of Khartoum.

“Let’s make sure he is paid in Sudanese pounds from here on in,” Clooney said.

Members of the Committee embraced Clooney’s suggestions, noting the economic argument would likely work better with China than a humanitarian one. Using financial sanctions and tracking down illicit funds were also appropriate for Khartoum’s leaders, who they described as criminals.

“The [Sudan] government should not be afforded the legitimacy of the international community when their leaders are scheduled to be at The Hague [the ICC] to stand for the crimes they have committed,” said Sen. Benjamin Cardin (D-Md.).

The senators were particularly curious about the Satellite Sentinel Project, an initiative developed by Clooney and human rights activist John Prendergast, a former director for African Affairs at the National Security Council.

The project is aimed at “deterring war crimes before they happen,” rather than “bemoaning” the fact that they do after, Prendergast told the committee.

Using satellite images provided by satellite company Digital Globe, plus analysis from students at Harvard University and advocacy initiatives from Prendergast’s Enough Project, Satellite Sentinel can identify movement and military buildup on the ground, alerting targets of attack in the hope of prevention.

“If there isn’t action taken and the attacks do happen, at least we have the visual evidence, empirical evidence to be able present to the ICC and U.N. Security Council, and others for hopeful prosecution in the future,” Prendergast told the Committee.

Clooney said he was aware the public could experience “donor fatigue” and “misery fatigue” from hearing about the horrors of Sudan, but noted that as activists it was important to keep the issue alive.

One way to do that was to time action with peak events. This was one of those events he said, noting that there was a bill before the House on Sudan that covered many of the issues raised. He expressed hope that the Senate would consider a similar bill.

Clooney and Prendergast were due to meet with President Obama and Secretary of State Hillary Rodham Clinton on Thursday, AP reported.