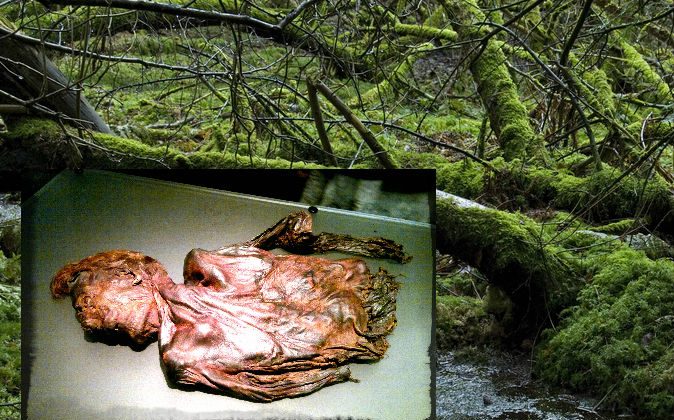 Left: Clonycavan Man, who lived around the 4th or 3rd century B.C., now a “bog body,” on display at the National Museum of Ireland in Dublin. (Mark Healey/Wikimedia Commons) Background: A file photo of a bog. (Shutterstock*)
archaeology

In March 2003, the body of a man who lived during the Iron Age was discovered in a peat bog in Ireland. Known as the Clonycavan Man, the well-preserved remains indicate that the body was not that of a man who died a natural or honorable death, but one who was brutally murdered. The mysteries surrounding his death are plentiful. Who was this man? Why was he so brutally murdered? How was his body so well preserved for so many years? And what is the significance of his highly groomed hair?

The Clonycavan Man’s remains are referred to as a “bog body.” The discovery of ancient and well-preserved bodies in peat bogs has been fairly widespread. When a dead body is deposited into bog water that is highly acidic, low in temperature, and low in oxygen, the body can remain intact for thousands of years, including skin, hair, and organs. This unintended mummification gives us a glimpse into the lives and deaths of ancient humans who weren’t necessarily honored as a royal or dignitary, like the mummified remains found in Egypt.

The Clonycavan Man was found in Clonycavan, County Meath in Ireland, in a machine that had been harvesting peat. The remains, which have been dated to 2,300 years old, consisted of a head, neck, arms, torso, and upper abdomen.  It is likely that the peat harvesting machine was responsible for severing his lower body. It is estimated that he was between the ages of 24-40 when he died. The visible details of the Clonycavan Man are astonishing. His estimated height was five feet, two inches tall. His nose was squashed, and his teeth crooked. The pores of his skin were still visible, and it has been concluded that his diet consisted mostly of fruits and vegetables. Due to the damage from the peat harvesting machine, the Clonycavan Man did not have hands, but other bog bodies have been discovered to have very well-manicured fingernails.

One of the most distinguishing characteristics of the Clonycavan Man was his hair. On his face he wore a goatee and a moustache, while on his head was a very distinguished hairstyle. The front of his hair was shaven, giving him a higher hairline on his forehead. The remainder of his hair was several inches long, and was intricately folded forward and then back in what has been described as an “ancient Mohawk.” It is believed that standing at only five feet, two inches, the Clonycavan Man chose this hairstyle to make himself appear taller.  Scientists even discovered an ancient form of hair gel in his hair, made of plant oil and pine resin. The presence of this hair gel indicates that he was fairly wealthy during his lifetime, because it was made from materials found in France and Spain.

The most mysterious aspect of the Clonycavan Man is the manner of his death. Some have suggested that he was a King, who was ceremoniously sacrificed. The injuries to his body suggest a particularly grisly death, which may have possibly been the result of torture. There is evidence of three significant blows to his head, to the point where his skull split open. He had also been hit in the nose and the chest and was disemboweled. His nipples had been sliced off, which is specifically believed to be a sign of a failed kingship. In ancient Ireland, sucking on a king’s nipples was a sign of submission. Removing the nipples was intended to make a man incapable of kingship.

Unfortunately, the bog only preserves the body and doesn’t leave behind much other evidence. While it is fairly clear that he died a mysterious death, possibly akin to murder, there isn’t much else to tell us about who he was or why he died. The preservation of his body was not intentional, and it is unlikely that anyone ever intended for future civilizations to try to unravel the mystery of his death.

*Image of a bog via Shutterstock