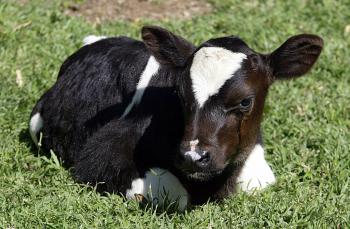 Africa's first cloned cow named Fut (meaning replica in Zulu) is on show to the media in the small town of Brits, Johannesburg. The US food health authority approved the sale of meat and milk from cloned livestock 15 January 2008, declaring the controversial products as safe to eat as those from normal animals. (Alexander Joe/Getty Images)
Europe

Helena Zhu
View profile
Follow
biggersmaller
Print
After the meat of the first offspring of a cloned cow entered the food chain in Britain last year, the Food Standards Agency (FSA) confirmed on Wednesday the illegal entry of a second bull’s meat.

Parable, born in May 2007 and slaughtered in May 2010, entered the food chain without passing the “novel food” test. All meat, milk, and eggs from cloned animals and their offspring need to go through a safety evaluation and be approved by all European Union member states before they can be legally marketed.

The first bull, Dundee Paratrooper, entered the food chain in 2009.

“Meat from both of these will have been eaten,” said the FSA.

A third bull, Dundee Perfect, was slaughtered this July, but the meat has not entered the food chain.

The three bulls were from a batch of eight calves born in the U.K. from eight embryos originally harvested from a cow cloned in the United States.

The FSA has tracked down all eight U.K.-born calves. Four of each sex were born; one male and one female died within a month of birth. The remaining three bulls were slaughtered, with the meat of two of them entering the food chain.

One of the remaining cows, Dundee Paradise is alive on a U.K. dairy farm. Local authorities told FSA that there is no evidence that the cow’s milk has entered the food chain.

The FSA believes that the other two cows are being kept as part of dairy herds.

“But at present we cannot confirm whether or not milk from these [two] animals has entered the food chain. Local authority officials are visiting the farms on which these animals are kept,” said the agency.

Although the agency said that no evidence shows that consuming products from healthy clones or their offspring poses a safety risk, animal welfare campaigners are concerned over health and ethical issues.

"The RSPCA [Royal Society for the Prevention of Cruelty to Animals] is totally opposed to cloning for food production on animal welfare and ethical grounds. Cloning has a huge potential to cause unnecessary pain, suffering, and distress which cannot be justified by purely commercial benefits,” RSPCA states on their website.

"Food from cloned animals may seem a tasty option for some, but it leaves a distinctly bad taste in the mouth when it comes to animal welfare," states the animal welfare organization.

The RSPCA said that in addition to ethical concerns, the animals often have breathing problems, tumors, liver defects, or other abnormalities.

Since Dolly the sheep was first cloned in 1996, a growing number of species have been cloned, including mice, cattle, pigs, goats, dogs, cats, horses, and mules.