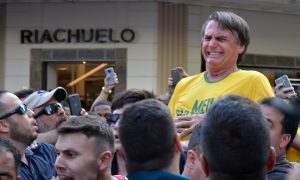 Exclusive: Who is Brazil’s Bolsonaro, Stabbed During Presidential Campaign?
0 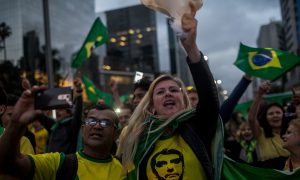 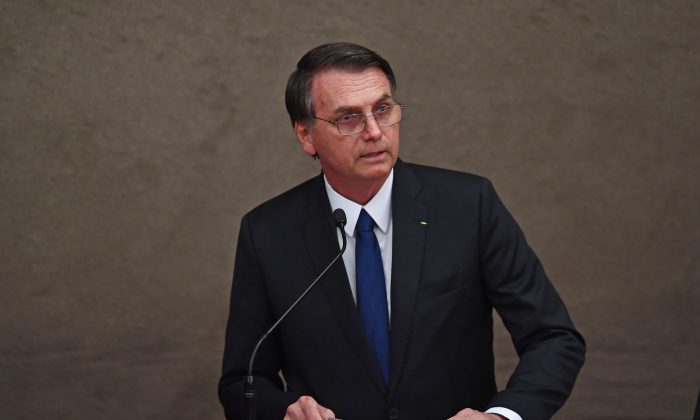 Clock Ticking on Reforms as Bolsonaro Steps Up in Brazil

Jair Bolsonaro will start his presidency Jan. 1 with three-quarters of Brazilians believing he is on the right track. Now the hard part begins.

Two months since riding to victory in a deeply polarizing election campaign, the former paratrooper has assembled a slimmed-down cabinet of economic liberals and social conservatives. These picks, along with his decision to sidestep the traditional wheeling and dealing with party bosses, appear to resonate with much of the electorate.

But questions about his political style remain. While the president-elect has moderated his divisive rhetoric and apparent disdain for democracy, he remains a blunt negotiator in a political system that prizes cordiality. His strategy of dealing with congressional caucuses rather than party leaders remains untested, and his anti-corruption stance faces scrutiny amid a probe into the finances of a family friend.

“Expectations are high for Bolsonaro to execute what he campaigned on, and he won’t have that much time,” said Danny Fang, a strategist at Banco Bilbao Vizcaya Argentaria in New York.

With its heavy reliance on ex-military officers, the new Brazilian government will be the country’s most right-wing in decades. A group of widely celebrated “Chicago Boys” led by Paulo Guedes, Bolsonaro’s so-called super minister, intends to modernize an economy that ranks 109th out of 190 in the World Bank’s ease of doing business report.

Guedes has vowed to pry open the economy, slash red tape and taxes, while shrinking the public debt. Many of those proposals will have to survive the quicksand of Brazil’s Congress. There’s also the risk of friendly fire from Bolsonaro himself, who blows hot and cold on the issue of privatization, as well as the uncertain investment outlook for emerging markets.

Among the structural reforms sought by investors, by far the most urgent is a shake-up of Brazil’s bloated and unsustainable pension system. After some back and forth, Bolsonaro now appears inclined to borrow heavily from outgoing President Michel Temer’s pension plan in order to speed things up in Congress.

“In the long term there are many solutions,” said Antonio Delfim Netto, a former finance minister and long-time economic adviser to Brazil’s top politicians. “In the short term, unfortunately, there is just one: It’ll have to be something similar to Temer’s reform.”

Yet a major question hanging over the administration is whether Bolsonaro will be able to forge the three-fifths majority in Congress needed to approve constitutional amendments such as the pension reform. Guedes has no experience in dealing with legislators, and Bolsonaro was a relatively inactive backbencher for most of his nearly three decades in the lower house.

Bolsonaro’s own party, which surged from nowhere to become the second largest in Congress, is already engaged in very public infighting. His strategy of negotiating with caucuses risks backfiring by ignoring the power that party leaders still wield. And telling legislators that the left-wing Workers’ Party will return to power if they don’t fall into line won’t work for long, if at all.

“That’s a campaign tactic,” said Silvana Krause, a professor of political science at the Federal University of Rio Grande do Sul. “Governing is not the same as campaigning.”

Beyond laxer gun controls, what will change most in Brazil under Bolsonaro may well be its foreign policy. Out goes the country’s traditional neutrality and defense of multilateralism and in comes an unabashed, pro-Western nationalism.

Tellingly, leaders of three socialist Latin American countries—Cuba, Venezuela, and Nicaragua—were uninvited to the swearing-in ceremony. A fan of President Donald Trump, Bolsonaro has threatened to withdraw from the Paris climate accord and move Brazil’s Embassy in Israel to Jerusalem.

Incoming Foreign Minister Ernesto Araujo recently summed up the new wave of nationalism tearing through Brazil in a blog post that lambasted previous governments for kowtowing to a detrimental rules-based global order.

“I want to help Brazil and the world free themselves from the globalist ideology,” Araujo told Brazilians on his blog. “Fill your chest and say: Brazil great and strong.”