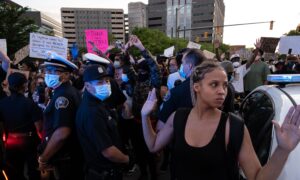 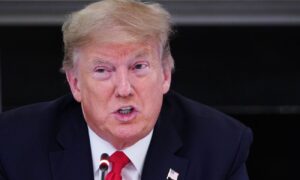 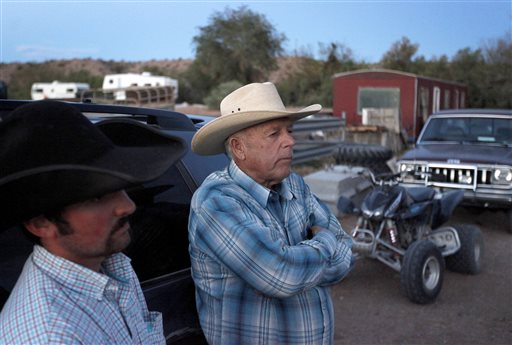 Republican Gov. Brian Sandoval pointed earlier to what he called “an atmosphere of intimidation,” resulting from the roundup and said he believed constitutional rights were being trampled.

Heller said he heard from local officials, residents and the Nevada Cattlemen’s Association and remained “extremely concerned about the size of this closure and disruptions with access to roads, water and electrical infrastructure.”

The federal government has shut down a scenic but windswept area about half the size of the state of Delaware to round up about 900 cattle it says are trespassing.

BLM and National Park Service officials didn’t immediately respond Wednesday to criticisms of the roundup that started Saturday and prompted the closure of the 1,200-square-mile area through May 12.

It’s seen by some as the latest battle over state and federal land rights in a state with deep roots in those disputes, including the Sagebrush Rebellion of the 1970s and ’80s. Nevada, where various federal agencies manage or control more than 80 percent of the land, is among several Western states where ranchers have challenged federal land ownership.

The current showdown pits rancher Cliven Bundy’s claims of ancestral rights to graze his cows on open range against federal claims that the cattle are trespassing on arid and fragile habitat of the endangered desert tortoise. Bundy has said he owns about 500 branded cattle on the range and claims the other 400 targeted for roundup are his, too.

BLM and Park Service officials see threats in Bundy’s promise to “do whatever it takes” to protect his property and in his characterization that the dispute constitutes a “range war.”

Sen. Dean Heller in a file photo. Heller said on April 9, 2014, referring to the Cliven Bundy case, that law-abiding Nevadans shouldn’t be penalized by an “overreaching” agency. (Chip Somodevilla/Getty Images)

Chris Miller holds his hand over his heart during a rally in support of Cliven Bundy near Bunkerville Nev. Monday, April 7, 2014, 2014. The Bureau of Land Management has begun to round up what they call “trespass cattle” that rancher Cliven Bundy has been grazing in the Gold Butte area 80 miles northeast of Las Vegas. (AP Photo/Las Vegas Review-Journal, John Locher)

Contractors for the Bureau of Land Management round up cattle belonging to Cliven Bundy with a helicopter near Bunkerville, Nev. Monday, April 7, 2014. (AP Photo/Las Vegas Review-Journal, John Locher)

Contractors for the Bureau of Land Management round up cattle belonging to Cliven Bundy with a helicopter near Bunkerville, Nev. Monday, April 7, 2014. (AP Photo/Las Vegas Review-Journal, John Locher)

Kornze, the new BLM chief, is familiar with the area. He’s a natural resource manager who grew up in Elko, Nev., and served previously as a senior adviser to Senate Democratic Majority Leader Harry Reid.

Reid aide Kristen Orthman said her boss “hopes the trespassing cattle are rounded up safely so the issue can be resolved.”

“No cow justifies the atmosphere of intimidation which currently exists nor the limitation of constitutional rights that are sacred to all Nevadans,” the governor said in a statement.

Sandoval said he was most offended that armed federal officials have tried to corral people protesting the roundup into a fenced-in “First Amendment area” south of the resort city of Mesquite.

The site “tramples upon Nevadans’ fundamental rights under the U.S. Constitution” and should be dismantled, Sandoval said.

BLM spokeswoman Kirsten Cannon and Park Service spokeswoman Christie Vanover have told reporters during daily conference calls that free-speech areas were established so agents could ensure the safety of contractors, protesters, the rancher and his supporters.

The dispute between Bundy and the federal government dates to 1993, when land managers cited concern for the federally protected tortoise and capped his herd at 150 animals on a 250-square-mile rangeland allotment. Officials later revoked Bundy’sgrazing rights completely.

Cannon said Bundy racked up more than $1.1 million in unpaid grazing fees over the years while disregarding several court orders to remove his animals.

Bundy estimates the unpaid fees total about $300,000. He notes that his Mormon family’s 19th century melon farm and ranch operation in surrounding areas predates creation of the BLM in 1946.

Since the cattle roundup began Saturday, there has been one arrest.

Bundy’s son, Dave Bundy, 37, was taken into custody Sunday as he watched the roundup from State Route 170. He was released Monday with bruises on his face and a citation accusing him of refusing to disperse and resisting arrest. A court date has not been set.

His mother, Carol Bundy, alleged that her son was roughed up by BLM police.