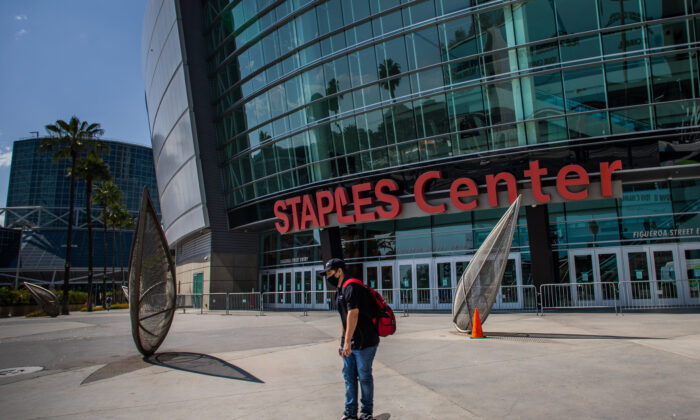 A man wearing a mask skates in front of the Staples Center in downtown Los Angeles, Calif., on May 9, 2020. (Apu Gomes/AFP via Getty Images)
Southern California

INGLEWOOD, Calif.—Following years of planning and a high-dollar legal battle, the Los Angeles Clippers broke ground Sept. 17 on their long-anticipated Inglewood arena—which will be called the Intuit Dome under a 23-year naming-rights deal with the tech giant.

The $1.8 billion arena at Century Boulevard and Prairie Avenue—near the SoFi Stadium football complex—is expected to be completed in time for the 2024-25 NBA season. The Clippers would continue to play at Staples Center until then.

“We want to build a home that is our home, that sets a standard for us,” Ballmer said. “We don’t want to play in anybody’s shadow.”

Ballmer said the building would be a technological marvel, featuring a two-sided “halo scoreboard” encircling the arena with more than an acre of lighting. The building will also include an 80,000-square-foot outdoor plaza and a full-size outdoor court.

“We drew inspiration from the resilience and persistence of our team,” Ballmer said of the effort to get the arena built. “You all, fans and players together, deserve the ultimate home court. It doesn’t feel like home court sometimes in our building today. But you’re going to have it and you’re
going to have it here in Inglewood. Absolutely.”

The complex will include the 18,000-seat basketball arena, team practice facility, and corporate offices for the Clippers. The city of Inglewood gave final approval to the project last year.

“When we began the search for a partner for the L.A. Clippers and our new dome, we looked for one that shares our passion for technology, the pursuit of innovation and our commitment to customers, fans and community,” Ballmer said in a statement released by the team. “Intuit is a perfect fit and we’re excited to be calling our future home the Intuit Dome.”

The team estimates the complex will generate about $260 million in annual economic activity for Inglewood and approximately $100 million in tax revenue over the first 15 years of operation.

Plans for the arena hit a legal snag when Madison Square Garden Co., which owned the nearby Forum, sued the Clippers and Inglewood, claiming the project violated a non-competition clause of the venue’s operating agreements with the city. The dispute was resolved last year when Ballmer purchased the Forum from MSG for $400 million.

The Forum is expected to remain primarily as a music venue.