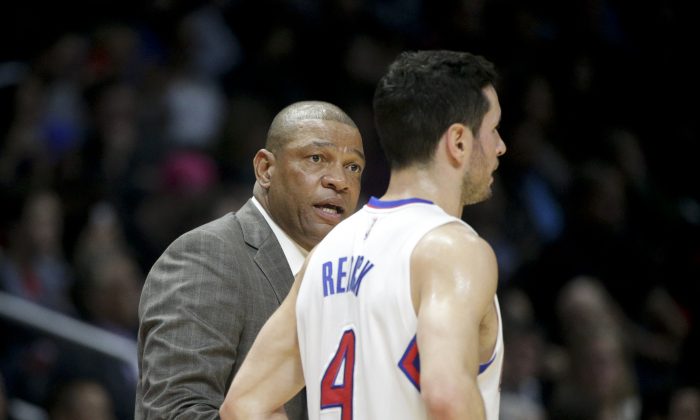 The Los Angeles Clippers are on a tear, winning eight in a row, as the news and rumors heat up.

Doc Rivers has been coaching for a long time, but just recently became a general manager as well.

But Rivers dismissed to ESPN the idea that there’s any discernible difference, except for the ultimate decision.

“There really is no actual difference in the two roles except when you do disagree. And Danny [Ainge] and I would disagree at times. At times he would say, ‘I need to do this, can you go with me?’ Or, ‘You know what? I’ll go with you.’ And it’s almost the same,” said Rivers, who is in his second season as Clippers head coach and president of basketball ops.

“[Clippers executives] Kevin Eastman, Dave Wohl and Gary Sacks — it’s no different. They’ll come in and say they like a deal, and I’ll say ‘I don’t like it.’ They’ll sit there and say they really like it and, ‘You should do it.’ One day, I’ll go with you and one day I’ll disagree. The only difference now is if I really disagree, I get my way.”

The broadcaster said “onlookers around the league” are wondering whether Rivers can do both jobs, and gave him a chance to respond.

“I mean, come on. It’s always the same. It’s the same with even contracts. When a player doesn’t get his contract, do you think he blames Danny Ainge or do you think they blame the coach? Most of the time, they blame the coach more because they think the coach didn’t go to bat for them. You can tell them all day, ‘Listen, guys. It was ownership. The only problem I have now is it’s tough to blame ownership. You could say ownership didn’t want to pay you last year. Now, it’s hard to say. Now you have to say, ‘I think ownership would pay, but we don’t want to pay.'”

However, Rivers has been criticized for his “uninspiring” filling out of the roster, and in particular the deal over the summer that saw the team send Jared Dudley and a conditional 2017 first-round pick to Milwaukee for Carlos Delfino and Miroslav Raduljica and a 2015 second-round pick.

“As dump deals go, it didn’t stack up well at all,” said a rival executive, one who’s mildly optimistic about Rivers’ prospects as an exec. “To give up a first and take back two guys to stretch — maybe it’s the best they could do, but it’s a bad deal.”

Blake Griffin’s court date in the alleged misdemeanor battery case has been est.

Griffin allegedly struck a man inside a nightclub in Las Vegas in October.

A status check will be held on January 12, the next step in determining whether Griffin will face trial.

“I told the court that I had been talking to the prosecuting attorney and we agreed to set a date for the status check,” Griffin’s attorney, Richard Schonfeld, told the Los Angeles Times.

“I have completed my independent investigation and will be prepared to present it to the court.”

A conviction can carry a sentence of up to six months in jail.

Griffin has declined to comment, but Rivers told reporters that he trusts Griffin and supports him.

“This will work out,” he said.

The Clippers have righted themselves after a rocky start, and Bleacher Report took the opportunity to note the top highlights of the year so far.

At number 3 is Gillian Zucker’s hire as president of basketball operations by new owner Steve Ballmer.

“She’s now the only female not named Jeanie Buss to serve as president or chief executive of a major U.S. professional sports organization. This wasn’t just history-making move. It makes sense. Her track record demonstrates as much. The former NASCAR and MLB front-office stalwart isn’t afraid of a challenge,” it said.

“She was comfortable enough to fire back at Dale Earnhardt, Jr. when he criticized Southern California racing fans. That same attitude will serve the Clippers well as they reinvent their organization following a tumultuous offseason in the wake of an ownership change.”

The second top highlight was locking down the Houston Rockets on November 28 during their road trip. They held James Harden to 16 points.

The number one highlight so far is Griffin’s game winning three-pointer on Monday night.

The shot, which hit the rim and got a lucky bounce, meant the Clippers beat the Suns 105-104 in double overtime.