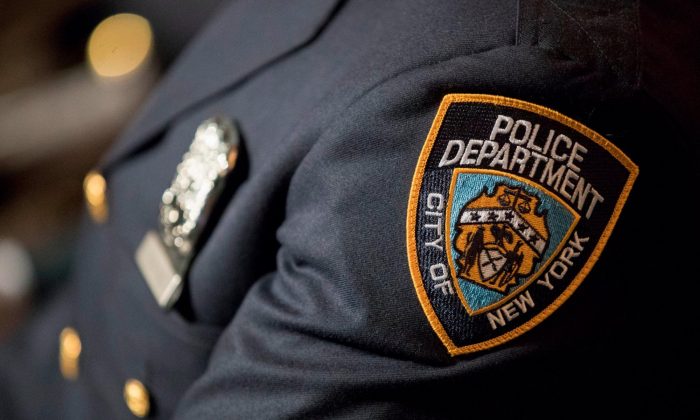 An NYPD officer in a file photograph. (Mary Altaffer/AP)
US News

A New York City Police Officer who was seen in a viral video being helped by good Samaritans has issued a statement, saying it “put a little bit of faith back in humanity.”

The NYPD told the New York Daily News that the officer was placing items in the truck that had belonged to a cab driver driver who was arrested on Sunday, July 28 in Manhattan.

The trunk came down on the officer’s finger.

Apparently, his finger got trapped in the trunk and was stuck behind the car, the report said.

He was identified by the Daily News as Brett Armstrong.

Armstrong then called out for help as bystanders passed.

“For me, it put a little bit of faith back in humanity,” he told the newspaper, and he told one, “thanks for your help” in the video.

He then “tried giving him a fist bump, because I was unable to shake his hand at the time,” Armstrong told the Daily News.

The rescue effort was uploaded to Twitter (Warning: it contains graphic language):

Just another day in NYC. pic.twitter.com/WoKRVFBNUt

The men are seen trying to open the trunk from the driver’s side door.

“Someone, help! Help! Help!” he shouts. Other bystanders then ran to the car and managed to open his trunk.

The NYPD issued an official statement about the matter.

“While on duty in Lower Manhattan on Sunday evening, July 28, an officer assigned to Patrol Borough Manhattan South was loading items into the trunk of his patrol car when the lid came down on his right hand, trapping his middle finger,” NYPD spokesman Alfred Baker said in a statement to the New York Post.

“A passerby came to the officer’s aid and, with the help of other civilians, was able to open the trunk lid and free the officer,” Baker said. “The officer was not seriously injured.”

Other details about the case were not clear. The men who helped free the officer were not identified in media reports or by the NYPD.

Cellphone videos of people brazenly dousing uniformed New York Police Department patrolmen with water have sparked outrage and led police officials to urge the force not to tolerate the behavior.

Police on July 23 were looking into two recent instances captured on video clips widely circulated on social media that show four on-duty officers—all sent to break up unruly gatherings around open fire hydrants during a recent heat wave—getting soaked themselves as onlookers jeer.

In one of the videos, an officer making an arrest of a suspect in Harlem appears to get hit in the head with a red plastic bucket as he and his partner are splashed with water. The other shows two officers getting repeatedly doused as they walk down a Brooklyn street looking sheepish as a woman’s voice in the background is heard saying, “Oh, they violated them.”

At a police event July 23, NYPD Chief of Department Terence Monahan said the department wants to make arrests in both cases but drew a sharp distinction between them. He described one as a potential assault on an officer doing his duty and the other a failure of officers to respond to a clear provocation.

In Brooklyn, “Someone thought it was all right and take a bucket of water and toss it over a cop’s head,” Monahan said. “That’s not all right… Any cop who thinks that’s all right, that they can walk away from something like that, maybe should consider whether or not that this is the profession for them.”