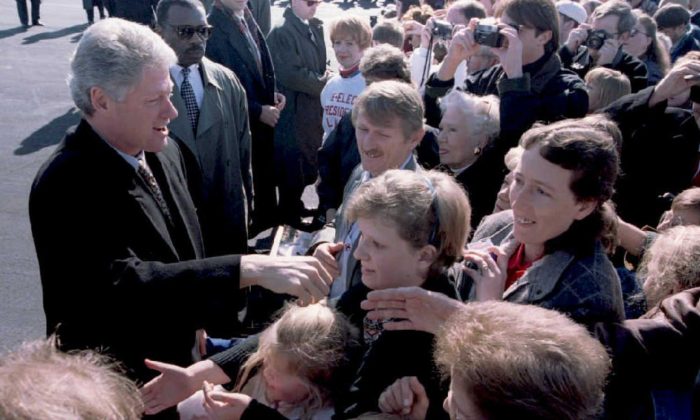 Then-president Bill Clinton (L) greets people in 1995 at the airport in Little Rock, AK. The airport was recently renamed after Bill and Hilary Clinton, who will attend a ceremony marking the first phase of renovations.(Luke Frazza/AFP/Getty Images)
US

Clintons Will Highlight Little Rock Airport Ceremony in May

Bill Clinton, former President, and Hilary Clinton, former Secretary of State, are slated to attend a ceremony that celebrates ongoing renovations to a Little Rock airport that was recently renamed after them.

The ceremony on May 3 will mark the first phase of renovations, which include a larger and modernized ticket lobby and a new baggage-screening system.

At the ceremony, the airport will officially be renamed the Bill and Hilary Clinton National Airport. The Municipal Airport Commission in Little Rock voted last March to rename the airport after the couple.

“Bill and Hillary Clinton not only devoted years of service to Arkansas, but have served the nation as a two-term President, and as First Lady, U.S. Senator, and Secretary of State—that’s a legacy of which all Arkansans can be proud,” Jim Dailey, chairman of the airport commission, said in a statement at the time.

Bill Clinton was the governor of Arkansas for almost 12 years before becoming president in 1992, and grew up in Hope, Arkansas.

The May 3 event is open to the public, and tickets are free, but people must reserve theirs at clintonairport.com.