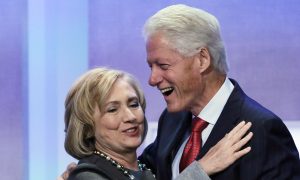 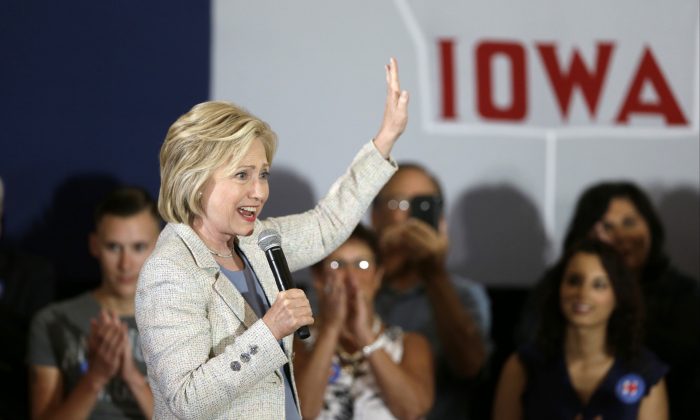 FILE - In this July 26, 2015, file photo, Democratic presidential candidate Hillary Rodham Clinton speaks at Iowa State University in Ames, Iowa. In her many visits to the leadoff caucus state, Clinton has included multiple remarks with regional references. The approach is a stylistic shift from Clinton’s failed 2008 presidential bid, which began poorly with a third-place finish in the Iowa caucuses. (AP Photo/Charlie Neibergall, File)
Politics

In her many visits to the leadoff caucus state, the Democratic presidential contender has spoken about the Republican governor’s efforts to close mental health institutions, mourned a murder in an Iowa City area mall, deplored the deportation of an area pastor originally from Honduras and peppered her remarks with all sorts of other regional references.

Obama and the Clintons: Top Dems Mingle on Martha’s Vineyard

In her years as secretary of state, she had the world on her plate. Now all politics is local, as the saying goes.

The approach is a stylistic shift from Clinton’s failed 2008 presidential bid, which began poorly with a third-place finish in the Iowa caucuses. Advisers say this is the product of many hours spent in small house parties talking to residents, calls to close Iowa contacts and a clear sense she must do more to engage with Iowans intimately.

“She’s really sitting down and talking to people, and I think that’s why,” said Andy McGuire, chairwoman of the Iowa Democratic Party. She backed Clinton in 2008 but is remaining neutral this time.

Clinton commented on her efforts to make local connections at a Burlington house party this summer.

“I want to know what’s actually happening, so I can come up with proposals that may actually change people’s lives,” she said.

Iowa-centric politicking won’t sway all Iowa Democrats. While Clinton is the clear front-runner, they’ve demonstrated growing support for her main rival, Vermont Sen. Bernie Sanders, and are taking a look at former Maryland Gov. Martin O’Malley as well. Many liberals are frustrated with Clinton, who has avoided taking a firm position on some key trade and environmental questions.

“I see everything she’s doing now as simply responding to polls,” said progressive activist Brenda Brink of Huxley, who considers herself “solidly in the Bernie camp.” Brink added: “I know she’s impressing some people.”

Since she entered the race in April, Clinton has made seven visits to the state and built a massive organizing network. Her Iowa director, Matt Paul, said she has been clear that she wants “time to have conversations with Iowans” on those visits. He said she keeps up with the local papers.

Clinton is taking a similar approach in other early-voting states — name-dropping local businesses and a winning local softball team during a recent town hall event in New Hampshire, for example. Supporters say all of this provides Clinton a way to connect and to counter criticism that she lacks warmth.

“This has always been strength for her, the one-on-one and the smaller-group stuff,” said Clinton spokesman Nick Merrill. “The difference is that we’re leaning into it this time.”

To be sure, she uses local talking points to weigh in on broader issues. At the Iowa City Public Library, she spoke about an area pastor who had been deported to Honduras this year, saying more discretion should be used in such immigration cases. And she cited the murder of a young woman at a local mall to affirm that she would “speak out about the uncontrollable use of guns in our country.”

Clinton also says that talking one-on-one with people in Iowa and New Hampshire has already influenced her campaign. She says she is focusing on mental health and drug treatment because of her conversations in these states.

Perhaps the most popular Iowa reference from Clinton is to the state budget. At a Democratic dinner, Clinton drew huge applause when she criticized Iowa Gov. Terry Branstad for some recent budget vetoes on education and mental health spending. O’Malley has also been critical of Branstad on the same issues as he campaigns in the state.

Some activists, though, want to hear more solutions from her on the big national issues of the day.

Ann Christenson is a founding member of 100Grannies.com, an environmental advocacy group in Iowa City that Clinton mentioned during a recent stop. “We were surprised and pleased” at the reference, said Christenson, 78. But she said other candidates have also been in touch and she’s still not sold on Clinton.

“She needs to come out against the Keystone XL and all other pipelines, including the Bakken Pipeline,” she said. She was referring to pipelines that would transport oil from Canada to Texas refineries and from North Dakota’s Bakken oil fields through South Dakota and Iowa to a distribution center in Illinois.