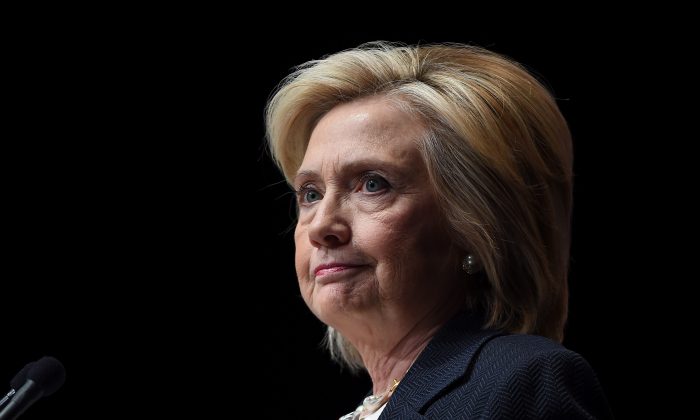 The Chinese Communist Party (CCP) is “trying to hack into everything that doesn’t move in America,” said former U.S. Secretary of State and Democratic Presidential candidate Hillary Clinton during a July 4 campaign rally in New Hampshire.

This theft includes commercial secrets and blueprints from defense contractors, Clinton said according to TIME. “Make no mistake: They know they’re in a competition, and they’re going to do everything they can to win it.”

Clinton also called out the Chinese regime for its rapid militarization, and its land-grab in the South China Sea.

She said that while she wants to “see a peaceful rise for China,” according to CNN, “we also have to be fully vigilant that China’s military is growing very quickly and they are establishing military installations that again threaten countries we have treaties with, like the Philippines, because they are building on contested property.”

Hua also dropped the “peace and prosperity” line when referring to U.S.-China relations, which is a stark departure from China’s common response to U.S. criticisms against its cybertheft—which it typically calls “groundless accusations” and follows with criticisms against U.S. spy operations.

This highlights the odd relationship Clinton shares with the CCP. She initially received praise from Chinese state-run media when she shunned the issue of human rights in China. Over the years, however, the Chinese regime’s mouthpieces have turned to both criticisms and warnings against Clinton.

Two CCP-controlled newspapers published indirect warnings for Clinton to not criticize the Chinese regime during her presidential campaign, yet predicted that her position on China would change if she were elected president, according to The Washington Free Beacon in April.

People’s Daily and Global Times said Clinton “won’t be nice to China, at least during her campaign.”

“Clinton doesn’t want to be seen as ‘soft’ on China,” reported Global Times, according to The Washington Free Beacon, as it noted a tweet from Clinton that criticized the CCP for detaining five feminist activists.

Clinton’s relationship with the CCP was first forged with her decision to shun the issue of the Chinese regime’s human rights abuses in favor of focusing on trade.

“China has reacted with delight to Hillary Clinton’s decision on her first visit as U.S. secretary of state that she would put economic relations before human rights,” reported U.K.-based news outlet, The Telegraph, in February 2009, following Clinton’s first visit to China when she was Secretary of State.

“Mrs. Clinton not only made little public mention of the issue, but also showed no sign of having pressed China over another major bone of contention with America—claims that Beijing manipulates its currency to give itself an unfair trade advantage,” The Telegraph reported.

Her relations with the CCP changed the following year, at least on the surface, after Google pulled out of Mainland China while revealing Chinese cyberattacks on its networks and its censorship policies.

In January 2010, Clinton called on the CCP to lift its Internet restrictions. CCP Foreign Ministry spokesman Ma Zhaoxu responded, according to the BBC, by saying her comments were “groundless accusations against China.”

In August 2012, the CCP lightly criticized her for what it viewed as stepping out of line. Clinton was visiting the Cook Islands to attend the Pacific Island Forum, as the Obama administration was pressing a stronger military commitment to the Asia-Pacific region. The state-run People’s Daily said it was “not very appropriate” for her to attend the forum that drew representatives from nearly 60 nations.

In January 2013, without mentioning China directly, Clinton said the United States opposes efforts to undermine Japan’s administration of islands in the East China Sea. Her comments followed a push by the Chinese military to claim the Senkaku Islands, which are under Japanese control.

Until now, most of Clinton’s criticisms of the CCP were done very lightly, and on issues that were either circumstantial and in line with policies of the Obama administration, or where it would have been odd for her to not comment.

Her recent statement, however, was different. She took a much harsher position on the CCP’s growing aggression on the broad issues of cybertheft and militarization.

The CCP has taken a similarly different response. While in the past it has harshly criticized Clinton for even lightly stepping over its lines, it wrote off her latest comments as being in line with a “constructive spirit.”