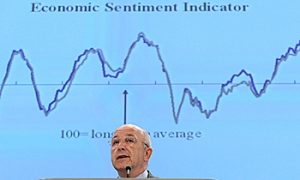 During her visit, Pakistan and Afghanistan officials signed off on a bilateral trade deal that had been pushed forward by the U.S. Relations between the neighboring countries have been strained for decades, but the Obama administration has been working hard to bring them closer together.

Clinton also assured Pakistani officials of America’s commitment to the long-term development of the country, development that goes beyond security matters.

On Monday, the secretary is scheduled to announce a massive financial aid deal for Pakistan. The aid is directed at water, energy, agriculture, and health projects and are part of a five-year $7.5 billion aid package, approved by Congress last fall.

Public opinion toward the United States has also been low recently in Pakistan. Clinton was hoping to take steps to improve that.

Airstrikes by unmanned U.S. drones against the Taliban in Pakistan's border region frequently result in civilian casualties, which is one reason why public opinion toward the United States has declined.

A report published last week by the Afghanistan Rights Monitor states that in Afghanistan 210 civilians were killed in airstrikes this year.

Part of her visit was scheduled to include a town hall meeting taking questions from local citizens and covered by local media.

Far-reaching security measures are being taken in Kabul to prevent possible attacks by insurgents during this conference.

On Sunday, however, a suicide bomber killed three Afghan civilians and injured dozens in Kabul.

"Nobody is going to offer a 100 percent guarantee, but they [security precautions] are very extensive and indeed intensive," said Sedwill, according to Reuters.

Clinton’s visit to Pakistan and Afghanistan comes amid American lawmakers’ concerns over the death toll of American and international forces. Last month, over 100 soldiers were killed despite the additional infusion of tens of thousands of new U.S. troops to Afghanistan this year.

Taliban and other insurgents have become “more resilient, multi-structured and deadly,” according to the Afghanistan Rights Monitor.