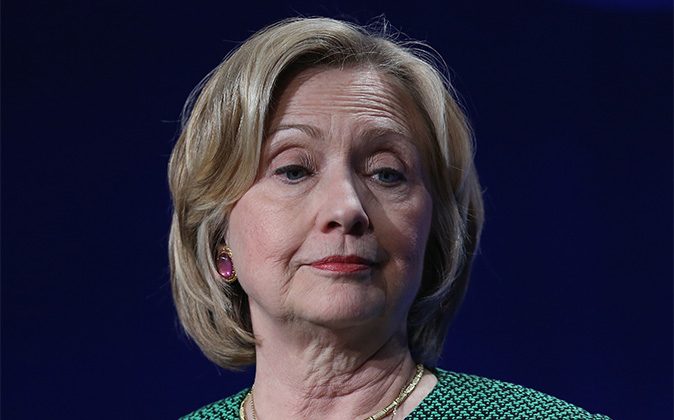 Hillary Clinton’s justification for her exclusive use of a personal email account as secretary of state was partially contradicted today by the State Department, who said Friday that the archiving of the work emails of rank-and-file department officials did not begin until February of 2015.

Clinton said Tuesday that her use of a personal email address did not violate the Federal Records Act because she sent emails to State Department officials on their work email address.

“It was my practice to communicate with State Department and other government officials on their .gov accounts so those e-mails would be automatically saved in the State Department system to meet record-keeping requirements, and that, indeed, is what happened,” Clinton said.

However, State Department spokesperson Jan Psaki said that automatic archiving of work emails for officials besides the Secretary of State did not begin until February of this year, according to Politico.

“Our goal is to apply this [automatic archiving] to all employee mailboxes by the end of 2016,” Psaki told Politico.

Clinton has been under heated scrutiny in recent weeks after it was revealed that she used a private email exclusively during her tenure as Secretary of State, in defiance of federal guidelines and national security concerns, as her email was hosted on the homemade clintonemail.com server.

The use of a private email account has also raised suspicions that Clinton could be hiding something from the public. Her aides and attorneys have helped her turn over more than 30,000 emails from her personal account to the State Department, but Clinton refuses to let an independent third-party do a search of her emails.

“I believe I have met all of my responsibilities and the server will remain private,” Clinton said on Tuesday.

The Congressional Committee on Benghazi maintains that a neutral arbiter is needed to check that Clinton has indeed turned over all of her work-related emails to the State Department, and has filed for a subpoena to have Clinton produce all emails from her private account related to Libya.

I believe I have met all of my responsibilities and the server will remain private.
— Hillary Clinton

“Without access to Secretary Clinton’s personal server, there is no way for the State Department to know it has acquired all documents that should be made public,” Rep. Trey Gowdy (R-S.C.), chair of the committee, said Tuesday.

Clinton raised eyebrows when she said that she deleted 31,830 emails on the same account related to her personal life, but data experts say that it’s likely the emails can still be retrieved from the server.

The State Department has also been criticized for being uncooperative with the Benghazi Committee. Rep. Gowdy said Thursday that when the State Department handed over copies of Clinton’s emails to the committee, it failed to disclose that she exclusively used a private email account.

“The bottom line is, they never once told us she only used a personal email account, and they only told us the Friday before the New York Times broke the story they didn’t have her records, that she had them,” Gowdy said on Newsmax TV.

Gowdy said that the committee had been working with the State Department on the emails since August of 2014.