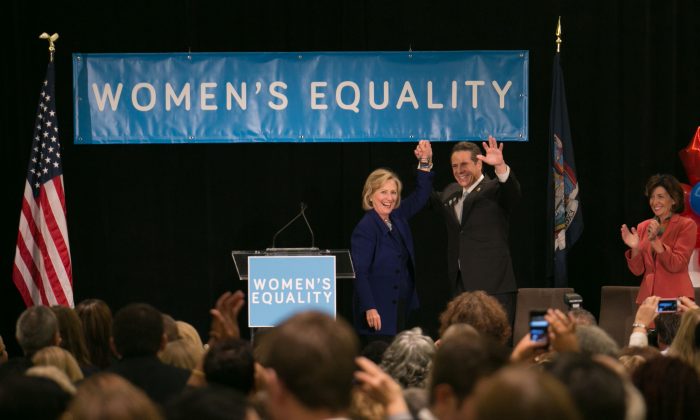 “Here, we know that if people turn out, Andrew and Kathy are gonna be elected,” Clinton told a packed ballroom of supporters at the Grand Hyatt in Midtown Manhattan Thursday, at a rally for Cuomo’s Women’s Equality Party (WEP).

She contrasted New York, a Democratic stronghold, with swing-states where gubernatorial races are often won at razor-thing margins.

“A lot of people are not thinking about turning out, they’ve turned out. They think, OK, the election is over, we know who is gonna be the next governor. You can’t take anything for granted in an election, I know that from first-hand experience,” she continued, referring to her defeat to Obama in the 2008 Democratic primary.

Clinton said that although much progress has been made in gender equity and that many glass ceilings have been broken, the county is still far from achieving full equality for men and women.

“Let’s not kid ourselves. We have not achieved equality. We have made a lot of progress, I’m standing here as a prime example of that, and I’m grateful for it,” Clinton said. “But we have not yet seen the kind of progress on all of the issues that will ripple from this ballroom out to every woman and girl in New York and beyond.”

She reserved special praise for the 10th plank of the WEP platform, which proposes codifying Roe v. Wade into New York state law.

“[Cuomo and Hochul] will never waffle on a woman’s right to make her own reproductive healthcare choices. They will never shame and judge a woman for decisions that are complex and deeply personal, decisions that belong to a woman, her family, her faith, and her doctor,” she said.

In addition to the platform of the WEP, Clinton also called for “quality, affordable childcare” for working women, and shared a poignant anecdote from her experiences as a mother of a young child. Chelsea Clinton was two when she fell ill on the day her mother needed to go to court for a trial. Her babysitter was sick and Clinton had to find a trusted friend to take care of her.

“I had so many advantages and support, but even then I felt squeezed,” Clinton said. “I felt terrible, I felt terrible that I had to leave my sick child at all. I called home at every break, and I rushed back to the house as soon as I could. And when I opened the door, I saw my friend reading to Chelsea, who was thankfully feeling better. And for the first time that day, my own head and stomach stopped aching.”

Cuomo, who spoke after Clinton, returned the adulatory rhetoric in kind, and all but stated his endorsement for her in a 2016 presidential bid.

However, Cuomo shied from questions about explicitly endorsing Clinton for president.

“You know that? That’s a fact? Where did you get that fact?” he shot back at a reporter who insinuated that Cuomo had endorsed Hillary. “Hillary Clinton can’t be endorsed because Hilllary Clinton hasn’t said she’s running for anything.”

At the rally, Cuomo portrayed the Women’s Equality Agenda as groundbreaking in the same manner as the gay marriage and gun control legislation New York pioneered.

The governor also attacked his opponent, Rob Astorino, for not being sufficiently supportive of abortion rights, and accused him of conflating religion and government. Astorino, like Cuomo, is Catholic.

“This is not about your religion, this is about the law, civil rights,” he said.

Among likely women voters in New York, Cuomo leads Astorino 65 to 28 percent in favorability ratings, according to a recent Siena College poll.