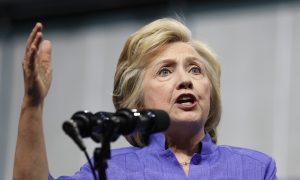 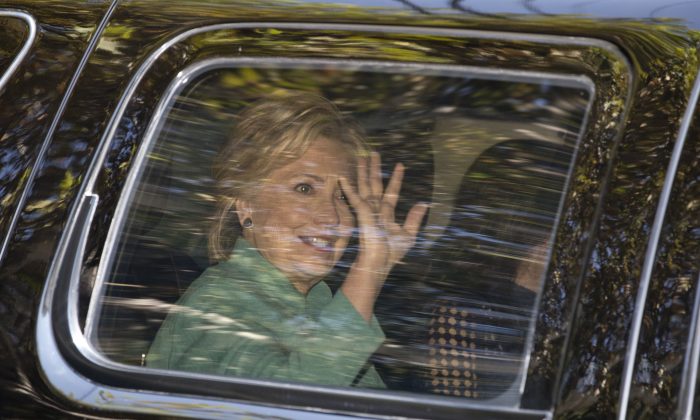 Democratic presidential candidate Hillary Clinton waves from her motorcade vehicle as she arrives for a fundraiser at the home of Justin Timberlake and Jessica Biel in Los Angeles on Aug. 23. (AP Photo/Carolyn Kaster)
Southern California

Clinton Raises $18 Million in 3 Days in the Golden State

REDWOOD CITY, Calif.—Hillary Clinton mingled with Hall of Fame basketball player Magic Johnson and Apple CEO Tim Cook, vamped in a photo booth with actor Justin Timberlake and dined with some of California’s richest families on what was likely the most lucrative fundraising swing of her presidential campaign.

The Democratic presidential candidate raised $18 million on a three-day trip through California, or roughly $270,000 an hour.

The visit to the West Coast comes amid a prosperous August for Clinton’s campaign, with the candidate and her surrogates hosting at least 54 events over the final two weeks of the month, according to a fundraising schedule. A weekend trip to Cape Cod featured stops at seaside estates and a Sunday “summer celebration” with the pop star Cher.

Clinton is trying to use the relatively quiet month of August, when voters are more focused on vacation than politics, to fill her campaign war chest.

In the Golden State, many of her events were at well-worn stops on the Democratic money trail. In Los Angeles, she stopped by Johnson’s Beverly Hills compound, where she spoke to the 500 supporters gathered outside.

Then she headed a few houses down the street to entertainment executive Haim Saban’s sprawling property, where she was feted at a 100-person dinner on grounds that included some of Saban’s lighted animal-shaped topiary. The price of admission: $50,000 a plate.

President Barack Obama had visited the same homes in 2013. But unlike Obama, who allows reporters to observe some of his opening remarks to donors, Clinton leaves the press waiting outside in vans and guesthouses, giving no hints at what she might be telling some of the country’s most powerful people.

Behind closed doors, Clinton soothed the worries and answered the questions of some of her most ardent backers.

At an intimate Bay Area dinner for 30, one donor asked about “healthers,” likening the unfounded rumors about Clinton’s health to the so-called birthers who questioned Obama’s birthplace.

Outside the Piedmont mansion, a crowd of children and their parents waited over two hours for Clinton, chanting her name in the chilly night air.

Clinton emerged from the home and for a few brief moments, campaigned. She made her way down the hastily assembled police line, shaking hands, snapping selfies and admiring the homemade signs.

Then it was back in the motorcade to prepare for another busy day raising money.

Keep track on how much Clinton and Trump are spending on television advertising, and where they’re spending it, via this interactive ad tracker. http://elections.ap.org/content/ad-spending.