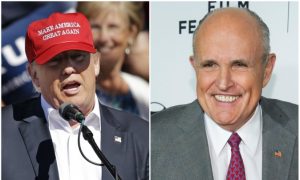 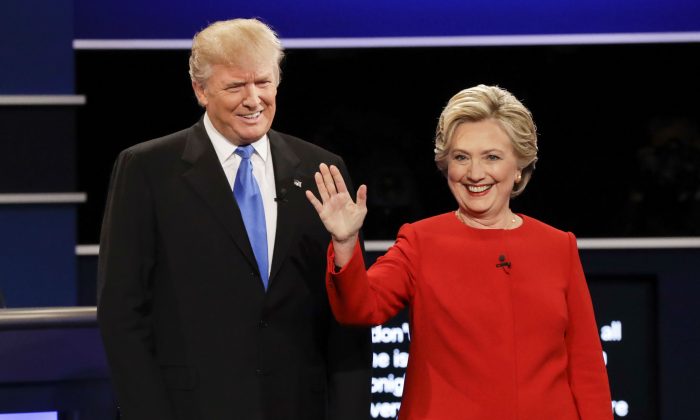 Clinton Puts Trump on the Defensive in Combative Debate

HEMPSTEAD, N.Y.—Donald Trump tried to pin the nation’s economic and national security problems on Hillary Clinton in the first presidential debate, belittling the former senator and secretary of state as a “typical politician” incapable of delivering the change many Americans crave.

But Trump found himself on the defensive for much of Monday’s 90-minute showdown, and the next morning, he spread the blame. He accused moderator Lester Holt of a left-leaning performance and going harder on him than Clinton, even floating the theory that organizers had intentionally given him a faulty microphone to set him up.

And after brushing off Clinton’s claim that he’d once shamed a former Miss Universe winner for her weight, Trump on Tuesday dug himself deeper.

“She gained a massive amount of weight. It was a real problem. We had a real problem,” Trump told “Fox and Friends” about the 1996 winner of the pageant he once owned.

Clinton was thoroughly prepared in the debate, not only with detailed answers about her own policy proposals, but also sharp criticism of Trump’s business record, his past statements about women, and his false assertions that President Barack Obama may not have been born in the United States. She said his charges about Obama were part of his pattern of “racist behavior.”

The Democrat also blasted Trump for his refusal to release his tax returns, breaking with decades of presidential campaign tradition. She declared, “There’s something he’s hiding.”

Trump has said he can’t release his tax returns because he is being audited, though tax experts have said an audit is no barrier to making the information public. When Clinton suggested Trump’s refusal may be because he paid nothing in federal taxes, he interrupted to say, “That makes me smart.”

The televised face-off was the most anticipated moment in an election campaign that has been historic, convulsive and unpredictable. The candidates entered the debate locked in an exceedingly close race to become America’s 45th president, and while both had moments sure to enliven their core constituencies, it was unclear whether the event would dramatically change the trajectory of the race.

The debate was confrontational from the start, with Trump frequently trying to interrupt Clinton and speaking over her answers. Clinton was more measured and restrained, often smiling through his answers, well-aware of the television cameras capturing her reaction.

Trump’s criticism of Clinton turned personal in the debate’s closing moments. He said, “She doesn’t have the look, she doesn’t have the stamina” to be president. He’s made similar comments in previous events, sparking outrage from Clinton backers who accused him of leveling a sexist attack on the first woman nominated for president by a major U.S. political party.

Clinton leapt at the opportunity to remind voters of Trump’s controversial comments about women, who will be crucial to the outcome of the November election.

“This is a man who has called women pigs, slobs and dogs,” she said.

The centerpiece of Trump’s case against Clinton was that the former senator and secretary of state is little more than a career politician who has squandered opportunities to address the domestic and international problems she’s now pledging to tackle as president.

“She’s got experience,” he said, “but it’s bad experience.”

Clinton, who hunkered down for days of intensive debate preparation, came armed with a wealth of detailed attack lines. She named an architect she said built a clubhouse for Trump who says he was not fully paid and quoted comments Trump had made about Iraq and about nuclear weapons.

When Trump made a crack about Clinton taking time off the campaign trail to prepare for the debate, she turned it into a validation of her readiness for the White House.

“I think Donald just criticized me for preparing for this debate,” Clinton said. “And, yes, I did. And you know what else I prepared for? I prepared to be president. And I think that’s a good thing.”

The candidates sparred over trade, taxes and how to bring good-paying jobs back to the United States.

Clinton said her Republican rival was promoting a “Trumped-up” version of trickle-down economics—a philosophy focused on tax cuts for the wealthy. She called for increasing the federal minimum wage, spending more on infrastructure projects and guaranteeing equal pay for women.

Trump panned policies that he said have led to American jobs being moved overseas, in part because of international trade agreements that Clinton has supported. He pushed her aggressively on her past support for the Trans-Pacific Partnership trade pact while she was serving in the Obama administration. She’s since said she opposes the sweeping deal in its final form.

Trump repeatedly insisted that he opposed the Iraq War before the 2003 U.S. invasion, despite evidence to the contrary. Trump was asked in September 2002 whether he supported a potential Iraq invasion in an interview with radio personality Howard Stern. He responded: “Yeah, I guess so.”

Presented with the comment during the debate, Trump responded: “I said very lightly, I don’t know, maybe, who knows.”

The Republican also appeared to contradict himself on how he might use nuclear weapons if he’s elected president. He first said he “would not do first strike” but then said he couldn’t “take anything off the table.”

Clinton said Trump was too easily provoked to serve as commander in chief and could be quickly drawn into a war involving nuclear weapons.

Some frequently hot-button issues were barely mentioned during the intense debate. Illegal immigration and Trump’s promises of a border wall were not part of the conversation. And while Clinton took some questions on her private email server, she was not grilled about her family’s foundation, Bill Clinton’s past infidelities or voter doubts about her trustworthiness.