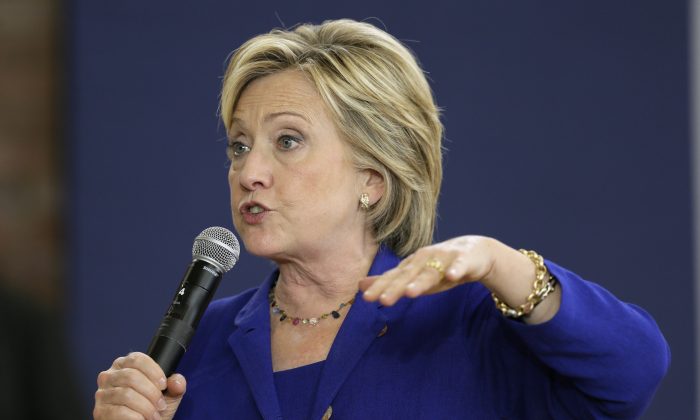 SIOUX CITY, Iowa—Democratic front-runner Hillary Clinton is guarding against complacency as she travels along the snow-covered fields of Iowa.

“I need you,” she says repeatedly on the rope-line between handshakes and selfies.

Wary of another mishap in Iowa, Clinton is preaching a message of urgency, challenging her supporters to dig in during the final month before the state’s lead-off presidential caucus. She casts her candidacy as a check against Republicans and avoids mentioning her main Democratic rival, Bernie Sanders, whose polling numbers remain at striking distance.

“We can’t take anything for granted,” Clinton said Monday night at Des Moines’ State Historical Museum, a replica of a massive wooly mammoth looming off to the side as she spoke. “It doesn’t happen just because we wish it. It doesn’t happen because it’s inevitable.”

Clinton’s presidential bid faltered in Iowa in 2008, when she finished third against then-Sens. Barack Obama and John Edwards. She defeated Obama in the New Hampshire primary but the future president prevailed after outlasting Clinton in a series of contests during the spring.

This time, Clinton has built a formidable team of field organizers around Iowa, mindful of the ground game edge that Obama had in the state in 2007 and 2008. Polls have shown Sanders leading in New Hampshire, his neighbor to the east, giving Clinton little margin for error here.

If the former secretary of state stumbles in Iowa again and is defeated by Sanders in New Hampshire, it would almost certainly renew worries about her ability to unify the party’s liberal and moderate factions.

She enjoys strong support among Latino and black voters who are pivotal in Nevada and South Carolina, the third and fourth contests, but consecutive losses might diminish her standing.

“If I get off to a good start here in Iowa, we’re halfway home,” Clinton said in Davenport. During a stop Tuesday night in Council Bluffs, she urged Democrats to consider a candidate’s “electability and how we make sure we have a Democrat going back in the White House in January 2017.”

Few and far between are the days between now and the Feb. 1 caucuses in which Clinton or one of her messengers aren’t scheduled to campaign around Iowa.

Former President Bill Clinton will be in Cedar Rapids and Dubuque on Thursday on behalf of his wife, and is certain to return. Her team is also dispatching backers like Virginia Gov. Terry McAuliffe, a top adviser during her 2008 campaign, and actress Lena Dunham of HBO’s “Girls” in the coming days.

“Nobody’s complacent because of the 2007 and 2008 experience. This is not a done deal,” said Agriculture Secretary Tom Vilsack, a former Iowa governor who introduced Clinton at events on Monday. “I like what she’s doing — she’s reminding people what’s at stake here. That’s a motivating factor.”

Much of Clinton’s message revolves around defending Obama’s legacy. She warns that a Republican president would repeal Obama’s health care law, slash taxes on the wealthy and undercut executive actions on gun violence and pollution.

Part of her goal is to make a personal connection with voters over issues, as she puts it, “that keep families up at night.” In Sioux City on Tuesday, she rolled out a new initiative to provide more federal resources for 3.5 million Americans with autism.

Last month, she announced a $2 billion plan to address Alzheimer’s during a stop in Fairfield, Iowa, and she frequently talks about substance abuse and mental health problems at events.

Democrats say Sanders appears to have made a more emotional connection with his supporters — even though polls show him trailing here — while Clinton is viewed as the party’s standard-bearer and favorite to win the nomination.

“He seems more genuine,” said Dan McCarthy of Bettendorf, a defense worker who spoke about Sanders as he sat with his mother before a Clinton event in Davenport. “I don’t like the idea of having the same people over and over again. You’re not going to change anything.”

McCarthy said he was supporting the Vermont senator while his mother, Joan, said she was still assessing the Democratic field.

But Clinton’s argument brought at least one fence-sitter onto her side in Des Moines.

“To me, it’s who is more electable,” said Al Hart, a retired social studies teacher from Ankeny who said he decided to support Clinton after listening to her speech at the museum. “I think she’s got the fire in belly to get elected. She’s been through this before.”

Grant Woodard, a Des Moines lawyer and veteran of several Democratic campaigns, said the size of the caucus would play a major role given Sanders’ attempt to attract college students and first-time caucus-goers. Most expect it to fall somewhere between 2008’s record of about 240,000 and the 125,000 who participated in 2004.

“Sanders people are more motivated but I am not sure there’s enough of them,” Woodard said. As for Clinton, he said the challenge was simple: “How do you keep them motivated when folks think this is in the bag?”